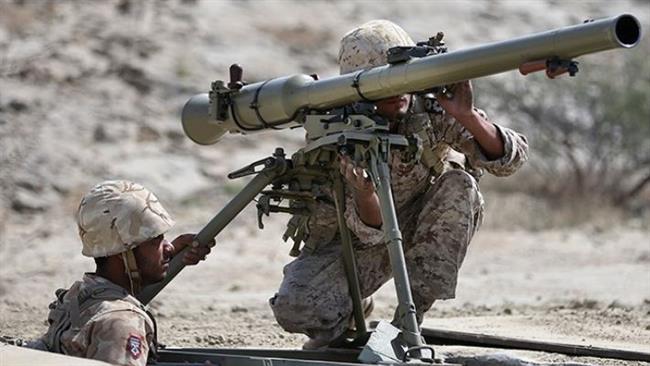 Iran’s IRGC forces hold the second day of their drills in the south of the country on February 27, 2015.

Friday’s drills involved IRGC’s naval, land and airborne forces. A new strategic weapon was also tested in the exercises. The three-day maneuvers kicked off on Wednesday.

Day 2 of the drills

IRGC’s ground forces held the second day of the military exercises on in a stretch from Jask to Sirik city in Iran’s southern Hormozgan Province.

Various types of weaponry were tested with some of them being introduced for the first time.

The reconnaissance drone known as RPH is capable of flying both during days and nights with a maximum range of 14 kilometers. The unmanned aerial vehicle (UAV) is equipped with advanced cameras enabling it to take images of the enemy’s positions.

The weapon is like an engine-free cruise missile which is launched by a gyroplane. The precision of the short-range missile is about one meter and it can hit targets as far as 14 kilometers away.

The roadside mine is used to target armored vehicles with high precision and power. The mine is operated by a remote control and if used, it could destroy armored columns within a radius of 100 to 150 meters. The explosive is capable of penetrating up to 50cm into armor and can affect at least 100 enemy forces.

A bounding mine with a projectile height of 10-15 meters and is good at targeting the enemy’s copters.

The weapon is a rocket-fired minefield sweeper which can clear an area 100 meters long and nearly two meters wide. It hugely improves the defensive capability of forces in confronting the enemy.

The weapon contains explosives which doubles the power of normal TNT and can be used on warheads to improve their destruction capability.

A 12.7mm shoulder-fired weapon with six rotating barrels used to target cruise missiles. Its rate of firing is 2500-3500 rounds per minute.

A 23mm rotary cannon, with a firing rate of 900 to 1200 per minute used against cruise missiles and low-height drones.

The shoulder-fired weapon is a 20 mm cannon which is used by the IRGC infantry.

The combat robot is equipped with a 7.62 caliber machine gun, advanced optics and a thermal camera, with an effective operational range of 5-7 km.

The protective layer can be instantly installed to counter explosions or rocket-propelled grenades (RPGs).

Day 1 of the drills

Day one of the war game saw the IRGC’s armed units engaged in various exercises, including the laying mines in the strait of Hormuz by dozens of IRGC vessels, destruction of hypothetical UAVs by 100 IRGC vessels, launching rockets at a mock-up of a United States aircraft carrier, launching Nasr Cruise missiles at the carrier by the IRGC helicopters, the successful launching of the Fateh and Zelzal missiles at fixed ground targets, launching of Khalij Fars long-range and ballistic missiles, the seizure of the repilca aircraft carrier by the IRGC Navy Special Forces, a parade by the IRGC speedboats backed by a number of Army’s F-4 fighter jets as well as cruise carrier vehicles and Shahed helicopters.