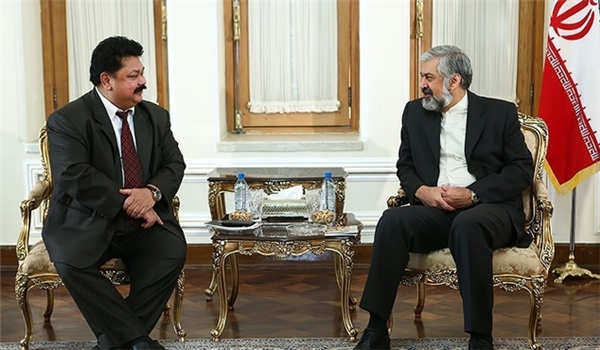 Sarmadi made the remarks in a meeting with Sri Lankan outgoing Ambassador to Tehran Mohammad Feisal Razin on Wednesday.

During the meeting, Sarmadi appreciated the efforts the ambassador made during his tenure to promote bilateral ties, and expressed hope that by settling the problems, the ground will be prepared for expansion of economic cooperation and completion and implementation of projects in Sri Lanka.

Razin, for his part, presented a report about his three years activities in Tehran.

Iran and Sri Lanka have had official diplomatic relations since 1961.

Sri Lanka is an island country in the Northern Indian Ocean off the Southern coast of the Indian subcontinent.

In January, Iranian President Hassan Rouhani said that Tehran was resolved to strengthen its ties with friendly nations, including Sri Lanka.

In a message to Sri Lankan President Maithripala Sirisena on Sunday, President Rouhani extended his congratulations to Sirisena on his election as the country’s president, and expressed the hope that the bilateral relations between Tehran and Colombo would witness further enhancement in his tenure.

“I sincerely congratulate Your Excellency’s election as the president of the friend country, Sri Lanka,” wrote President Rouhani in his message.