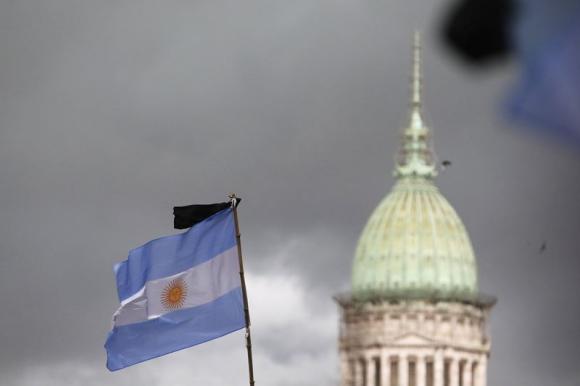 A black ribbon is seen on a national flag with the National Congress building in the background during a silent march to honour late state investigator Alberto Nisman in Buenos Aires February 18, 2015.
CREDIT: REUTERS/ENRIQUE MARCARIAN

(Reuters) – Argentine lawmakers passed a bill on Thursday to revamp the country’s intelligence service, parts of which President Cristina Fernandez has portrayed as sinister, accountable to no one and possibly responsible for the death of a star prosecutor.

Fernandez’s leftist government submitted the bill after state investigator Alberto Nisman was found dead on Jan. 18, a few days after he accused Fernandez of trying to cover up Iran’s alleged role in the 1994 bombing of a Jewish community centre. She rejected the accusation as “absurd”.

Fernandez says the new state security body established under the legislation will be more accountable. But government opponents say the legislation does little more than change the name of the spy agency and had been rushed through Congress. The opposition boycotted some of the debate.

It is still not known if Nisman shot himself in the head or was murdered. Fernandez’s government has said rogue agents tricked Nisman into making false accusations against her as part of a wider plot to unseat the president. Iran has consistently denied any involvement in the 1994 AMIA centre truck bombing.

The lower chamber of lawmakers approved the bill by a majority of 131 votes to 71 after an overnight debate, a statement by the governing Front for Victory coalition said.

Fernandez now has to sign the bill, which she is expected to do in the coming days.