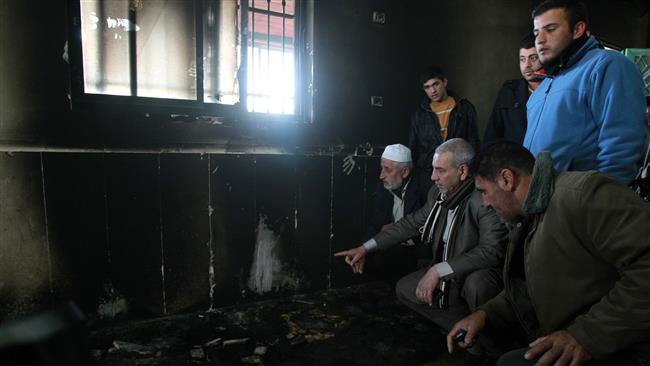 Israeli settlers attack a Palestinian mosque in the West Bank.

Suspected Israeli settlers have set fire to a Palestinian mosque in a village in the occupied West Bank and left Hebrew graffiti on its walls.

The mosque, in the village of Jabaa near the city of Bethlehem, was torched early on Wednesday and its walls and carpeted floor suffered damage, said Jibreen al-Bakri, Bethlehem’s governor.

Residents detected the fire and were able to distinguish it before its spread to the rest of the mosque, the Palestinian news agency WAFA reported.

The Hebrew graffiti on the walls, shown by an Israeli TV network, read, “We want the redemption of Zion” and “revenge” alongside a Jewish Star of David.

The settlers, mostly armed, regularly attack Palestinian villages and farms and set fire to their mosques, olive groves and other properties in the West Bank under the so-called “price tag” policy. However, Tel Aviv rarely detains the assailants.

In mid-October last year, Israeli settlers set ablaze a part of the Abu Baker al-Saddiq Mosque, which is located in the village of Aqraba in the West Bank, in an arson attack.

In a similar move in January 2014, Israeli settlers attacked a Palestinian mosque in the north of the occupied West Bank, torching a part of it. The main gate and some carpets of the mosque, which is in Deir Istiya village, were damaged in the incident.