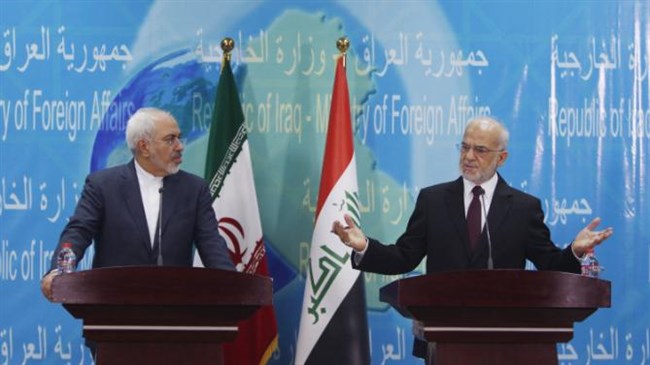 “Iran (along with other countries will continue helping Iraq battle ISIL,” he said in a press conference with Iraqi Foreign Minister Ibrahim Al-Jafari.

He also called on the international community to fight the ISIL and terrorism more seriously, and block military and financial support for the terrorist group.

“…Iraqi government is the key responsible for the operation (against the ISIL), and every country has to cooperate only with Iraq.”

Ibrahim Al-Jafari, for his part, stressed establishing security across the region, and said, “Turkey, Iraq, Saudi Arabia, Kuwait and other countries are located in a region in which any tension is not in favor of them.”

He also said, “We condemn measures of certain countries supporting terrorism in terms of fund, equipment, media and ideology and paved the way for arrival of terrorists in the region.”

The Iraqi foreign minister said that before the formation of the US-led coalition against the ISIL Takfiri group, Iran offered its full support to Iraq “when the ISIL terrorist group invaded the country’s cities.”

Since August, the US and some of its allies have been conducting airstrikes against what they say are ISIL positions in Iraq. Some members of the US-led coalition also started bombarding “ISIL targets” inside Syria in September. However, the raids have so far failed to dislodge the Takfiri group.