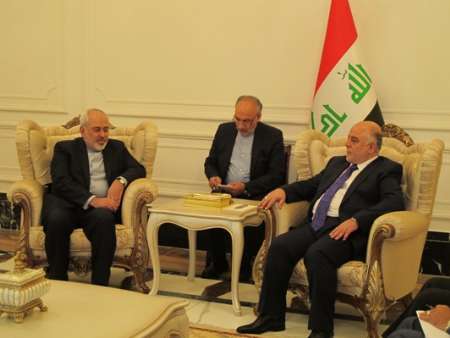 Zarif went directly to the Iraqi capital from two days of nuclear talks in Geneva with US Secretary of State John Kerry. In the words of Iran’s State media, he declared, “[We] will not leave Iraq alone in the fight against terrorism.”

No official explanation was given for the sudden change in Zarif’s travel plans. However, the theme of counter-terrorism continued with Iraqi Prime Haidar al-Abadi’s statements on “Iran’s role in the campaign against terrorism” and “the need for cooperation among countries in the Middle East to fight the menace, according to Iranian outlet Press TV.

Another clue to Zarif’s visit came from his statement on the four-year Syrian crisis, where Iran is facing difficulties over its economic and military backing of the Assad regime. Speaking along Iraqi counterpart Ibrahim al-Jaafari, Zarif condemned Turkey’s military intervention in northwest Syria last weekend, moving the tomb of the grandfather of the founder of the Ottoman Empire:

In our view respecting territorial integrity and not using force in international relations is a fundamental and rigid principle in the international law and disrespecting this principle could be of no help to the establishment of security in the region.

We ask all the neighboring and regional countries to seriously and accurately consider this important principle because deviating from this path could pose a serious danger to the region.

Iran’s political and military involvement in Iraqi affairs has escalated since the Islamic State’s offensive last June took much of northern and eastern Iraq and challenged the Baghdad Government. Tehran has despatched equipment, troops, and commanders, notably the head of the elite Qods Force, Qassem Soleimani.

At the same time, the Supreme Leader has led denunciations of US intervention in the country, with Iranian officials repeatedly claiming that Washington — along with Britain and Israel — created the Islamic State.