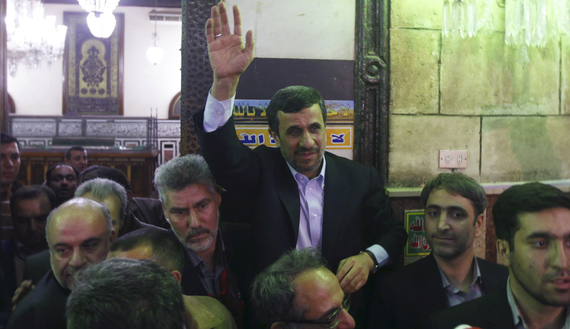 At the funeral ceremony of Mahmoud Ahmadinejad’s mother in the city of Qom on Feb. 22, supporters of the former Iranian president chanted, “On the life of any real man, Ahmadinejad will return.” The return of Ahmadinejad, whether in the 2016 parliamentary elections or back in the president’s seat in 2017, is always a hot topic in Iranian media and leads to wild speculation and analysis.

Sadegh Zibakalam, an outspoken Tehran University professor who is a supporter of President Hassan Rouhani’s negotiations with the West and a target of Iran’s hard-liners, wrote an interesting column in Shargh daily about the likelihood of Ahmadinejad’s return to politics. Rather than focusing on whether or not Ahmadinejad has the political clout or the blessing of the supreme leader to return to politics, he focused on some of the institutional problems within the Iranian executive branch.

Zibakalam wrote that anyone who chants “on the life of any real man, Ahmadinejad will return” has “a correct understanding of the world of politics in Iran.” He added, “Our executive system has two characteristics that make the return of Ahmadinejad likely; first, accountability is not taken very seriously in our executive system.”

Because of the lack of accountability in the executive office, according to Zibakalam, the view of Ahmadinejad’s supporters is that whatever the former president did during his eight years in office was “right and necessary,” and whatever was not done was “also right and necessary.” Given this criteria, no one should expect that Ahmadinejad and his followers would not want his return.