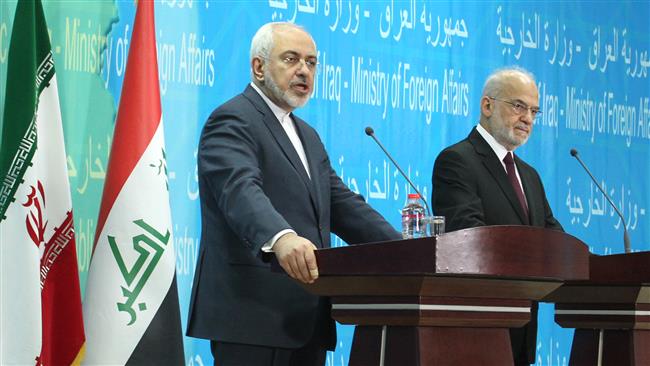 Good progress was made in Geneva talks: Zarif

Iranian Foreign Minister Mohammad Javad Zarif says “good progress was made on certain topics” during bilateral negotiations with the US delegate in Geneva.

Zarif made the remarks at a joint press conference with his Iraqi counterpart Ibrahim al-Jaafari in Baghdad on Tuesday, a day after the two-day high-level talks between Iranian and US officials wrapped up in the Swiss city.

“However, there are still issues that will be discussed in Geneva next week,” said the Iranian foreign minister, who is in Iraq for a two-day visit.

The senior Iranian diplomat went on to say that the Islamic Republic is seeking a solution to the West’s dispute with Iran over its nuclear program based on logic and mutual respect.

The Iraqi foreign minister said that before the formation of the US-led coalition against the ISIL Takfiri group, Iran offered its full support to Iraq “when the ISIL terrorist group invaded the country’s cities.”

Since August, the US and some of its allies have been conducting airstrikes against what they say are ISIL positions in Iraq. Some members of the US-led coalition also started bombarding “ISIL targets” inside Syria in September. However, the raids have so far failed to dislodge the Takfiri group.

Zarif reiterated Iran’s commitment to the country’s inviolable principles of respecting the territorial integrity of other countries and refraining from the use of force in international relations, adding that the Islamic Republic will continue to help Iraq in its fight against terrorism.

Nuclear talks between representatives from Iran and the US started on Sunday in Geneva and the two sides held three rounds of nuclear talks in two days in an attempt to narrow differences ahead of a key July 1 deadline for reaching a comprehensive deal.

Ali Akbar Salehi, the director of the Atomic Energy Organization of Iran (AEOI), and US Energy Secretary Ernest Moniz attended the recent talks to discuss the technical aspects of Iran’s nuclear program.

The Geneva negations were part of attempts by Tehran and the  P5+1 countries  – Britain, France, China, Russia, and the US plus Germany – to narrow their differences on the outstanding issues related to Iran’s nuclear program. The two sides have missed two deadlines since an interim deal was signed in November 2013. They have set July 1 as the next deadline for the talks.

The next round of nuclear talks between Iranian negotiators and representatives of the P5+1 group of countries will be held on the sidelines of the UN Human Rights Council in the Swiss city on March 2.