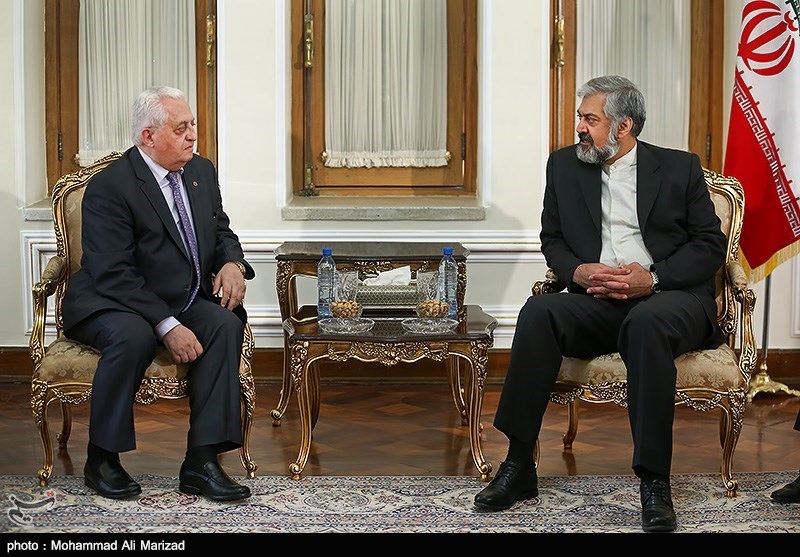 “Enhancement of ties with the neighbors is of special importance to the Islamic Republic of Iran,” Sarmadi said in a meeting with outgoing Armenian Ambassador to Iran Gregor Arakelian in Tehran on Wednesday.

The outgoing Armenian ambassador, for his part, said that during his six-year mission in Iran he did his best to broaden the relations between the two countries.

In January, Iranian Foreign Minister Mohammad Javad Zarif in a meeting with Armenian Prime Minister Hovik Abrahamyan in Yerevan underlined that Tehran sees no boundary for expansion of relations with Armenia.

“Iran is ready to cooperate with Armenia in different areas, including telecommunications, railway, energy, gas, electricity and cleaning of Aras River,” Zarif said during the meeting in the Armenian capital.

The Iranian foreign minister underlined that Tehran sees no limitation for broadening relations with Yerevan.

Zarif pointed to the recent visit of Abrahamyan to Tehran, and thanked the Armenian prime minister for his efforts to develop mutual cooperation with Iran.

The Iranian foreign minister voiced his pleasure in the membership of Armenia in the Euro-Asia alliance, and expressed the hope that the membership would help to the expansion of Yerevan’s bilateral ties with Tehran.

The Armenian prime minister, for his part, pointed to the status quo of Armenia-Iran relations, and said, “The two countries are having high-level political relations, but we should also try to expand the level of economic ties.”

Abrahamyan also vowed to do his best to remove the problems of the Iranian prisoners in Armenian jails.

He referred to the role of Iranian businessmen in the expansion of Iran-Armenia relations, and said, “We can have joint agricultural products and export our goods to the Euro-Asia member-states.”