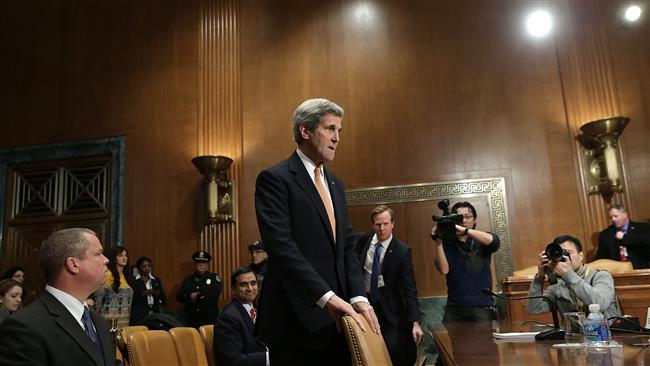 US Secretary of State John Kerry arrives for testimony before a Senate committee on Capitol Hill in Washington, DC, February 24, 2015.

US Secretary of State John Kerry has criticized officials who are speaking against a potential nuclear agreement with Iran, saying they don’t “know what the deal is” amid the ongoing talks over Tehran’s nuclear energy program.

In an apparent reference to Israeli Prime Minister Benjamin Netanyahu, Kerry said on Tuesday, “Anybody running around right now, jumping in to say well we don’t like the deal, or this or that, doesn’t know what the deal is.”

Netanyahu and some other officials in his regime have accused the Obama administration of trying to strike a “bad deal” with Iran.

“There is no deal yet,” Kerry told the US Senate Appropriations Committee. “And I caution people to wait and see what these negotiations produce.”

Iran and the P5+1 group of  states – Britain, France, China, Russia, the United States, Germany –  are holding negotiations to narrow remaining differences ahead of a deadline in late March for a framework agreement between the two sides. The deadline for the final agreement is July 1.

Kerry said the P5+1 group “had made inroads” since reaching an interim agreement with Iran in November 2013 on the Iranian nuclear issue. “We’ve gained unprecedented insight into it.”

The top US diplomat, however, sounded a note of caution, saying he was not sure yet whether a comprehensive agreement on Iran’s nuclear program was within reach. “And we expect to know soon whether or not Iran is willing to put together an acceptable, verifiable plan.”

According to a secret Mossad cable, released on Monday by Al Jazeera television network, Israel has been aware that Iran’s nuclear program is peaceful and does not include “the activity necessary to produce weapons.”

The Israeli spy agency sent the top-secret cable to South Africa’s State Security Agency (SSA) in October 2012 which presented a “bottom line” assessment of Iran’s nuclear work. The report concluded that Iran was “not performing the activity necessary to produce weapons.”

The document, which is in stark contrast with Israel’s anti-Iran rhetoric, was sent a few weeks after the Israeli premier’s September 2012 address at the UN General Assembly in which he claimed that Iran had reached 70 percent of the way to completing “plans to build a nuclear weapon.”

The Mossad report was published ahead of Netanyahu’s planned address to the US Congress on March 3, a move strongly opposed by the Obama administration amid the ongoing nuclear negotiations with Tehran.

US House Speaker John Boehner last month invited Netanyahu to address a joint session of Congress about the alleged threat of Iran’s nuclear program without consulting the White House or the State Department..

A similar CIA report, leaked on February 20, disclosed that Washington tried to mislead the International Atomic Energy Agency (IAEA) about Iran’s nuclear program through the provision of doctored evidence.

In addition, the IAEA has also conducted numerous inspections of Iran’s nuclear facilities but has never found any evidence showing that Iran’s civilian nuclear program has been diverted to nuclear weapons production.