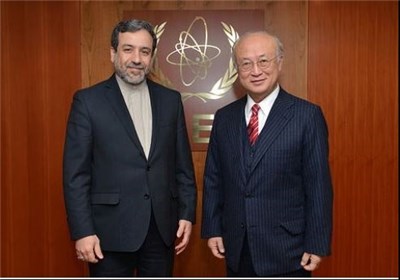 The U.N. nuclear watchdog said its head had a constructive meeting with Iran’s top negotiator in talks over Tehran’s atomic program on Tuesday, days after a U.N. report found cooperation had stalled.

Following the talks with his US counterpart, Iranian Foreign Minister Zarif, while pointing to some progress made in some issues discussed, said we have still a long path ahead to reach a final agreement.

Deputy foreign minister Sergei Ryabkov said that Moscow believes that the P5+1 group and Iran could reach an agreement on Tehran’s disputed nuclear program before the June 30 deadline.

A Russian military source reported that Moscow is mulling the option of offering Tehran S-400 sophisticated system as an alternative in case the latter rejected Antey-2500 system which was suggested by Russia to replace S-300, according to RT.

Iran says to move faster in cooperation with IAEA

Iran’s nuclear negotiator promised speedier cooperation with the International Atomic Energy Agency on Tuesday, days after the U.N. watchdog said Tehran was continuing to stall parts of an investigation into its nuclear programme.

Iran’s Ambassador and Permanent Representative to the United Nations Gholamali Khoshroo said all UN member states should observe the principles of UN Charter on promotion of peace and security, reign of law, economic development, social progress and human rights.

Iranian Foreign Minister Mohammad Javad Zarif is scheduled to attend a meeting of the Assembly of Experts in mid-February to discuss the latest developments in the region as well as the progress of nuclear talks with world powers.

A senior Iranian official says the Islamic Republic attaches importance to stability and tranquility in Lebanon, reiterating Tehran’s support for unity and solidarity among the Lebanese factions for the election of a new president in the Arab country.

Source familiar with the subject said that the next meeting of the P5+1 group with Iranian delegation on Tehran’s nuclear program will take place on March 2 in Lausanne, Swizterland.