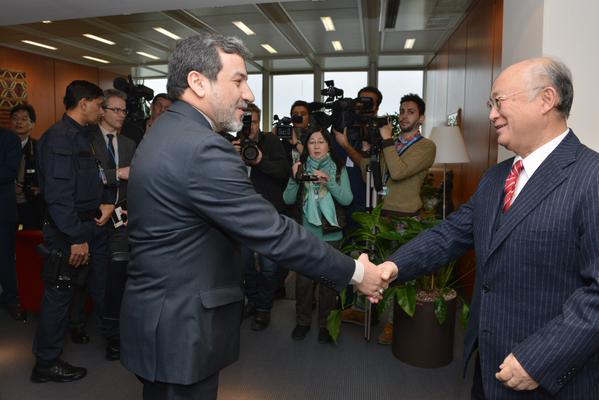 Iran says to move faster in cooperation with IAEA

The member of Iran’s nuclear negotiating team shakes hands with Amano in Venna on Feb 24, 2015.

(Reuters) – Iran’s nuclear negotiator promised speedier cooperation with the International Atomic Energy Agency on Tuesday, days after the U.N. watchdog said Tehran was continuing to stall parts of an investigation into its nuclear programme.

“We agreed … to move faster and in a better sense (in cooperation with the IAEA),” Abbas Araqchi told reporters after meeting IAEA head Yukiya Amano in Vienna.

Iran hopes to clinch a framework political deal with world powers by an end-March deadline over its nuclear energy work that the West fears is a cover for a weapons programme.

Lingering doubts over its cooperation with the IAEA could cloud those talks. Iran says its nuclear programme is entirely peaceful.

Araqchi said that progress had been made at the latest talks with representatives of the P5+1 group, made up of Russia, Britain, China, France, the United states and Germany, but that there was still a “long way to go”.

Talks will resume next Monday, it was decided after U.S. Secretary of State John Kerry and Iran’s Foreign Minister Mohammad Javad Zarif held talks in Geneva on Sunday and Monday.

A senior U.S. official said the sides at that meeting had been able to “sharpen up some of the tough issues”.