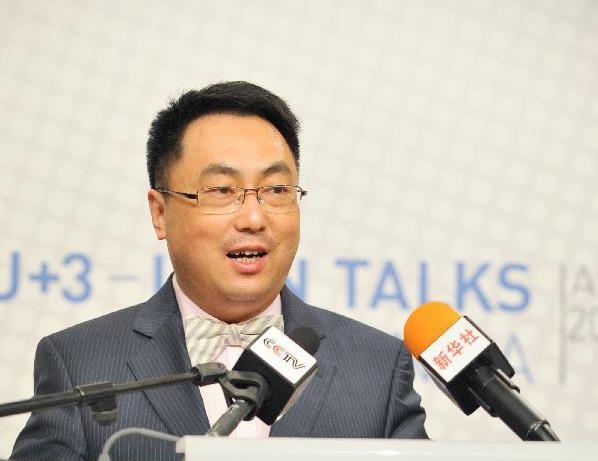 Director-General of the Department of Arms Control of Chinese Ministry of Foreign Affairs, Wang Qun

BEIJING, Feb. 23 (Xinhua) — As negotiators are meeting again over the Iranian nuclear issue, China has called for political resolve from all the parties.

It has been over a year since Iran and world powers agreed to return to the negotiating table over the country’s long-disputed nuclear program, yet wide differences have kept them from striking a final deal.

Delegates from Britain, China, France, Russia, the United States and Germany met Iranian negotiators on Sunday in Geneva to continue their diplomatic efforts for a long-term, comprehensive solution to the Iranian nuclear issue.

The negotiations are standing at “a crucial juncture,” Wang Qun, head of the Chinese delegation, told reporters prior to the start of the talks in Geneva.

As the talks go into details, he noted, challenges are mounting.

“Thus, political resolve has become imperative and even urgent,” said Wang, who is director-general of the Department of Arms Control of the Chinese Foreign Ministry.

China, he said, hopes all sides could boost confidence and inject political impetus into the talks so as to reach a comprehensive deal at an early date.

Iran has been a target of UN sanctions as a result of alleged attempts to build nuclear weapons. The West accuses Iran of developing an atomic bomb under the cover of a civilian program. But Tehran insists on the peaceful purpose of its nuclear program.

Iran agreed to suspend nuclear activities in return for limited ease of sanctions under an interim deal with the six world powers in November 2013. How much nuclear capability Iran can keep and the steps to lift sanctions are among the sticking points in this round of talks.

Failing to bridge gaps, negotiators agreed in November 2014 to extend the deadline for another seven months.

During his visit to Iran earlier this month, Chinese Foreign Minister Wang Yi urged Iran and world powers to jointly push for a successful “sprint finish” of the marathon talks.

All sides should be determined to overcome difficulties and obstacles to secure a successful outcome, Wang added.

A comprehensive deal will rid the Iranians of economic sanctions and maintain peace and stability in the region, said the Chinese minister.

“A DISTANCE TO TRAVEL”

The meeting was a culmination of a fresh round of bilateral engagement between the two countries starting on Friday.

Before heading to Geneva, Kerry warned in London that “there are still significant gaps, there is still a distance to travel” in the Geneva negotiations.

Earlier, the top diplomat said the United States aimed “to move toward a political framework by the end of March.”

In response, Iran’s supreme leader, Ayatollah Ali Khamenei, asked for a single-stage “detailed” agreement, rather than a political framework deal.

He also warned that a framework agreement may be abused by Iran’s opponents as a tool to force concessions from Iran in a final deal.

The Iranian leader vowed not to surrender to the sanction pressures from the West, warning that his country can retaliate by stopping natural gas exports to Western countries.

On Sunday, Zarif told state media that Iran will not sign any agreements that are “ambiguous and imperfect.”

Such agreements leave them open for myriad interpretations, hence concerns for all sides involved in the talks, the Iranian minister said.

In other words, “no accord will be sealed unless a comprehensive agreement is reached,” Zarif was quoted as saying.

“Petit, fragmentary and temporary agreements are neither in favor of our country or the other party.”

Good discussions have been under way over the past days in Geneva, but no agreements have been reached so far since differences remain, particularly over the removal of sanctions against Tehran, he said.