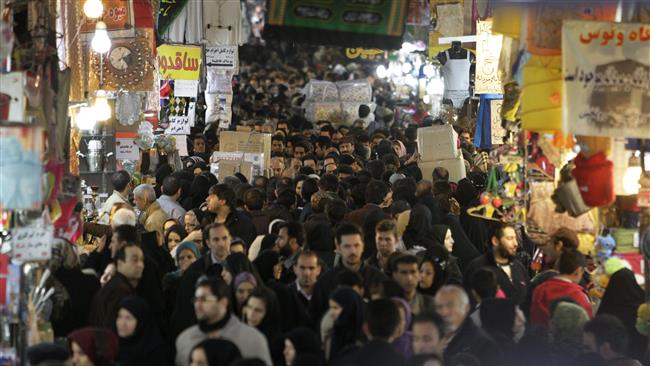 Sentiments are mixed in Tehran over the economic performance of President Hassan Rouhani.

Sentiments are mixed in Tehran over the economic performance of President Hassan Rouhani who won the 2013 election on a platform of promises for change.

A report by the Persian-language Seda ( The Voice) shows that economists and business people have differing views on whether Rouhani has been able to address the country’s key economic problems including rising inflation, unemployment, social welfare, industrial growth and investments.

Ali-Naqi Mashayekhi, an economist and a former lecturer at Iran’s Sharif University of Technology, said the government has been able to curb inflation and move the country toward the positive territory.  Mashayekhi said logic is ruling now that Rouhani is in office, emphasizing that this has already helped improve numerous problems in the country.  “Another issue that plays a crucial role in improving Iran’s overall business environment is fighting corruption,” he said.

“Over the period since Rouhani came to office, there has been a stronger determination on the part of the government and other related institutions to fight corruption. This is an important issue for the well-being of the economy because corruption is the worst malady for the business environment of every country.”

Nevertheless, Hossein Raqfar, a renowned Iranian economist, said Rouhani’s administration has failed to present a precise plan for improving the economy.  Raqfar said recession in Iran’s economy has become deteriorated ever since the new government took office thus the conditions have become worse.

“No specific measure has ever been taken regarding the issue of unemployment,” he told Seda. “Many businesses over the past few years have gone bankrupt and many have been put out of their jobs.”

He added that the government needs to force the banks to award loans to small businesses – what he said could help generate new jobs.

Mohammad-Reza Behzadian, a former president of Tehran Chamber of Commerce, agreed with Raqfar. He told Seda that Rouhani’s team has not been successful in improving Iran’s business environment.

Behzadian said the banks are largely to blame for the failure of the Iranian economy to move toward a stronger recovery.

“The government … has pressed the banks to help the industries and businesses and think less about their own profits,” he said.  Yet, Behzadian added, the response that the government has received on this front is still far from satisfactory.

Several other business people that Seda has interviewed believed that Rouhani’s administrationhas had a fair success on the economic front.

Razi Miri, a member of the board of representatives of Tehran Chamber of Commerce, said the conditions that the sanctions as well as the plunging prices of oil have created for Iran have already killed expectations for any specific change toward positivity in the Iranian economy.  Nevertheless, he says Rouhani’s economic team has been able to make some limited achievements including controlling inflation.

Feriyal Mostoofi, another member of the board of representatives of Tehran Chamber of Commerce, said the public should not expect miracle from Rouhani only a year and a half from his election.