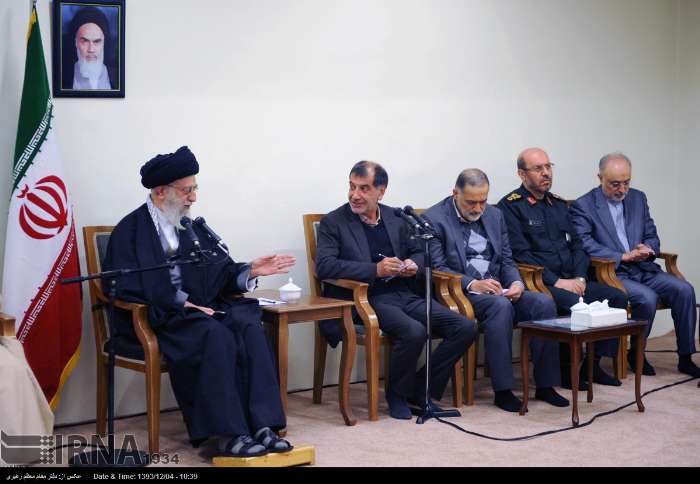 Leader: Resistance economy has to be applied practically

Iran’s supreme Leader meets member of a committee in charge of ceremonies to celebrate the ‘Engineer Day’ in Iran on February 23, 2015.

TEHRAN, Feb. 23 (MNA) – Iran’s Leader asserted that resistance economy has to be implemented practically by Parliament and government and has to go beyond lip service.

Considering the extended arena of engineering and the role of young engineers in different historical periods of Iran, particularly the Islamic Revolution and the Imposed War, the Leader said “during the War our young engineers were scarifying loyal soldiers that applied their power and knowledge fully.”

Ayatollah Khamenei emphasized on the efforts and achievements made by Iran’s engineering society after the War and stressed that they have to prove the motto of “we can” and fill the gaps in all needed fields.

The Leader, regarding the harm of excessive import and smuggling, urged the engineers to try in a way that the productions of young talented youth would not be ignored under the heavy load of imports.

Leader of the Islamic Revolution, meanwhile, asked all government officials to practically implement the Resistance Economy policies, as “merely paying lip service would have no effect.”