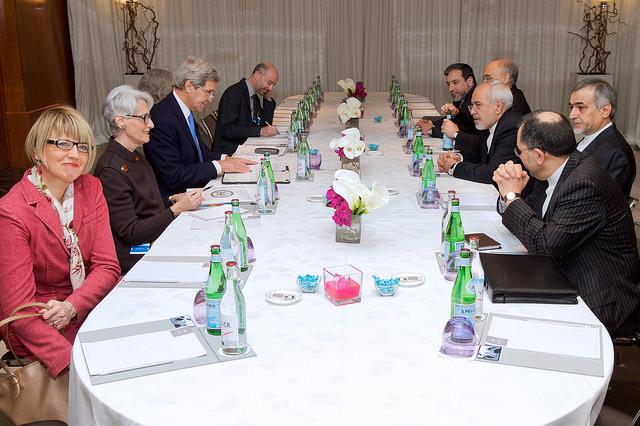 The Iranian and US delegations hold a second round of nuclear negotiations in the Swiss city of Geneva on February 23, 2015.

Geneva: US Secretary of State John Kerry and his Iranian counterpart Mohammad Javad Zarif held marathon talks here to resolve the remaining issues on Tehran’s contentious nuclear programme, as a meeting of the P5+1 nations with the Islamic republic ended on a positive note.

Salehi and Iranian President Hassan Rouhani’s brother and close aide Hossein Fereydoon along with US Energy Secretary Moniz made their maiden appearance in the talks signalling that the negotiations are entering a sensitive stage.

The US and Iranian diplomats along with negotiators from the P5+1 group have been meeting in Geneva since last three days to smoothen out major bumps in reaching a nuclear deal.

The tricky negotiations have mainly been over Iranian uranium enrichment and the pace of removing sanctions, which the US wants to stagger over time.

Kerry had warned yesterday that “significant gaps” remain ahead of the March 31 which the Obama administration has set to agree on a political framework for the deal.

Two deadlines for a permanent agreement have been missed since a November 2013 interim deal in which Iran was given limited sanctions relief in exchange for diluting its stock of fissile material from 20 per cent enriched uranium to five percent.

Meanwhile, the meeting of P5+1 — China, Russia, the UK, the US, France and Germany — group nations was held on Sunday at the EU mission here and was attended by Iran’s Deputy Foreign Minister Seyed Abbas Araghchi.

“It was a fruitful meeting but we cannot claim any progress yet. It’s too early to say,” Araghchi said after the meeting.

The US side was attended by Under Secretary of State for Political Affairs Wendy Sherman.

The six powerful nations are trying to broker a deal with Iran to end a more than a decade-long standoff over its nuclear programme in return for an easing of sanctions.

Iran, however, has maintained that its nuclear programme is for peaceful purposes.