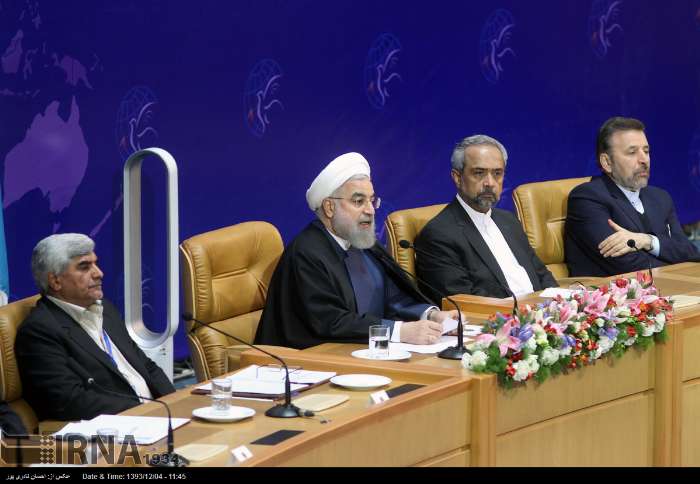 Iran’s president Rouhani addresses a ministerial conference of the Non-Aligned Movement (NAM) on science and technology in Tehran on Feb.23, 2015.

TEHRAN (Tasnim) – Iranian President Hassan Rouhani underlined that sanctions imposed against countries by some world powers hamper their scientific progress, and described the restrictions as one of the signs of “modern hegemony”.

“Access to sciences is one of the primary rights of nations and countries. The government or citizens of a country should not be deprived of knowledge under false pretexts,” Rouhani said, addressing a ministerial conference of the Non-Aligned Movement (NAM) on science and technology held in Tehran on Monday.

“Scientific apartheid has become an instrument for imposing underdevelopment and maintaining the cycle of poverty and unemployment in developing countries,” he noted.

“In response, independent countries should unitedly stand against such approach,” he added.

He further pointed to the sanctions imposed against Iran and said the country’s people have faced the most severe pressures over the past 12 years because of pursuing their right to achieve modern knowledge of peaceful nuclear technology.

The Iranian president also emphasized that scientific and technological cooperation between NAM member states would promote the countries’ prosperity and serve the ultimate purpose of the movement, which is the establishment of peace, tranquility and equality among all states.

The ministerial conference of on science and technology got underway in the Iranian capital of Tehran on Monday.

Guest representing 58 countries and international bodies, including 31 science ministers of the NAM member states, have taken part in the conference.

The purpose of the gathering is to formulate the general policies of science and technology in the NAM countries.

Delegations from some international institutions, such as the Islamic Educational, Scientific and Cultural Organization (ISESCO), The D-8 Organization for Economic Cooperation, also known as Developing-8, and the African Union (AU), have attended the conference.

The Non-Aligned Movement is a group of states which are not formally aligned with or against any major power bloc.