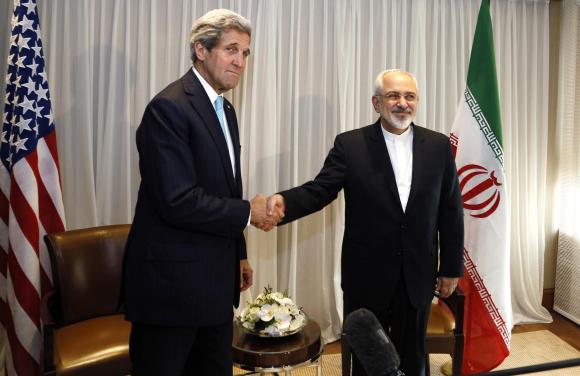 GENEVA: US Secretary of State John Kerry arrives in Geneva today for renewed talks with his Iranian counterpart on Tehran’s nuclear programme, after warning “significant gaps” remain as a key deadline approaches.

World powers are trying to strike a deal with Iran that would prevent Tehran from developing a nuclear bomb in return for an easing of punishing international economic sanctions.

Kerry is set to sit down for two days of talks with Iranian Foreign Minister Mohammad Javad Zarif, whose country denies its nuclear programme has military objectives.

The US top diplomat yesterday warned that major differences remained between the two sides.

“There are still significant gaps, there is still a distance to travel,” Kerry told a press conference at the US embassy in London.

There is a heightened sense of urgency to move forward as the clock ticks down towards a March 31 deadline to agree on a political framework for the deal.

“President (Barack) Obama has no inclination whatsoever to extend these talks beyond the period that has been set out,” Kerry said.

US and Iranian diplomats have been meeting in Geneva since Friday, and senior negotiators from the so-called P5+1 group of Britain, China, France, Russia, the United States and Germany were also expected to meet on Sunday to help drive the talks forward.

Kerry yesterday stressed that there was “absolutely no divergence whatsoever in what we believe is necessary for Iran to prove that its nuclear program is going to be peaceful.”

“The P5+1 remains united on the subject of Iran,” he said.

As a sign that efforts were stepping up a notch, US Energy Secretary Ernest Moniz flew in to snow-covered Geneva Saturday to take part in the talks for the first time.

Ali Akbar Salehi, the director of the Iranian Atomic Energy Organisation, was also participating in the negotiations.

Observers said Moniz and Salehi’s participation was a promising sign that a deal could be within reach.

But Kerry played down any suggestion that their participation meant the talks were on the verge of a breakthrough.

“I would not read into it any indication whatsoever,” he said, adding that Moniz was present because of the “technical” nature of the talks.

While the political aspects of the deal must be nailed down by the end of next month, the deadline for signing the full agreement is June 30 – a cut-off point that looms all the larger after two previous deadlines have been missed.
By AFP
Geneva talks, Iran P5+1nuke talks, Iran's Foreign Minister, Iran's nuclear program, John Kerry, Mohammad Javad Zarif, Quoted, US Secretary of State February 22, 2015
Either full deal or no deal: Iran
Iran politics soiled by ‘dirty money’: interior minister