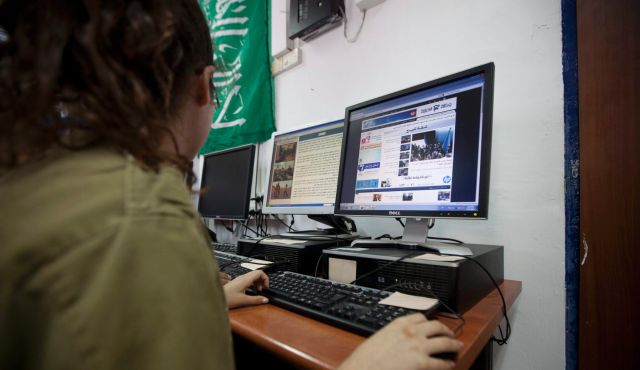 An illustrative photo of a Unit 8200 intelligence soldier at work. Photo by Moti Milrod

Israeli signals intelligence has cooperated with its U.S. and British counterparts to surveil Iran’s leaders, according to a document leaked this month by NSA whistleblower Edward Snowden.

The memo was written in April 2013 by the head of the Iranian department at the U.S. National Security Agency’s signals intelligence unit.

In January 2013, specialists from the NSA and the Israeli army’s 8200 signals intelligence unit discussed the Iranian leadership in detail. For the first time, a video conference took place between Israeli, American and British experts, the latter from Britain’s Government Communications Headquarters, the GCHQ. The document refers to 8200 as ISNU, which stands for Israel Sigint National Unit.

“The respective NSA-ISNU and CCHQ-ISNU bilateral relationships had gotten to the point that each participant recognized the need for the trilateral engagement to advance this specific topic,” the document states. “The trilateral relationship is limited to the topic of [word deleted] and will serve as a proof of concept of this kind of engagement.”

According to the memo, the GCHQ has “long advocated that it work with NSA and the ISNU in a trilateral arrangement to prosecute the Iranian target.” But the NSA’s signals intelligence chief “has been opposed to such a blanket arrangement, and this specific trilateral should not be interpreted as a broad change of approach. In other areas, NSA and CCHQ have agreed to continue to share information gleaned from the respective bilateral relationships with ISNU.”

“NSA has successfully worked multiple high-priority surges with GCHQ” during “ the storming of the British Embassy in Tehran; Iran’s discovery of computer network exploitation tools on their networks in 2012 and 2013; and support to policymakers during the multiple rounds of P5 plus 1 negotiation on Iran’s nuclear program,” the document states.

It adds that Iranian denial-of-service cyberattacks started in August 2012 against oil company Saudi Aramco and U.S. financial institutions. According to signals intelligence, these attacks were a response to Western operations against Iran’s nuclear program, and senior Iranian officials were aware of these attacks.

The NSA said it could not rule out such operations by Iran in the future “especially in the face of increased international pressure on the regime.”

According to the document, the NSA’s emergency plan in preparation for a crisis with Iran has been coordinated throughout the entire U.S. military and intelligence community.

The memo was drawn up during the tenure of the previous NSA chief, Gen. Keith Alexander. It addresses 8200’s operations when the unit was led by Brig. Gen. (res.) Nadav Zafrir and Military Intelligence was led by Maj. Gen. Aviv Kochavi.

In a previous document released by Snowden in 2013, operational, technological and budgetary cooperation between the NSA and 8200 was discussed.