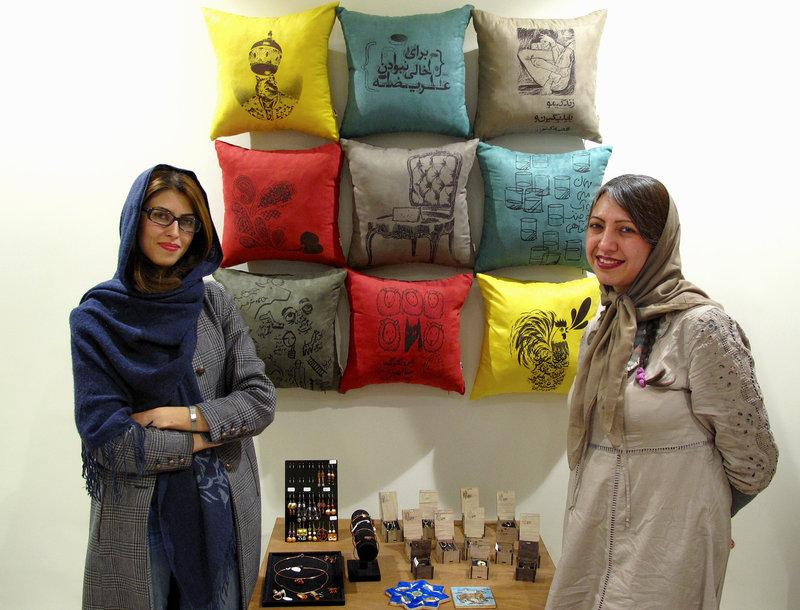 Iranians wait and wonder if a new dawn is coming

Sara Noghani (left) and Pooya Shahsiah, in their shop, Tehran Collage. Many of their designs feature words from Persian poetry that speak of a new dawn.
Molly Messick/NPR

When we walked into a shopping mall in Tehran, Pooya Shahsiah was waiting for us at the top of the escalator. She’s the co-owner of a trendy little shop on the second floor that sells shirts, scarves, cups and jewelry. Cloth hangs along the walls in reds and yellows and blues.

There is, for example, a purple shirt with a colorful illustration of a rooster crowing. Parts of the rooster are made out of Persian words.

Shahsiah says it was inspired by a Persian poem, and she’s applied the same design to scarves and mugs. It’s all from the same collection, she says: a poem about a new day, a new dawn.

Is that a metaphor?

Yes, most of our work consists of metaphor, she says. When she says “our work,” she means her work with her friend and business partner Sara Noghani.

They’re both in their 30s, and stylishly dressed, as you’d expect of the proprietors of a clothing shop. They met years ago, as college students, and lived through what seemed like a new dawn in Iran.

They went to cinemas, plays, and concerts more freely than at other times. It wasn’t so complicated making friends with men. That brief moment of openness was soon stifled by a conservative reaction.

“It was very great for us … because we were young, because we could do many things and we were a little bit free,” she says.

They’ve lived off that memory through more restrictive, and more troubled, recent times. They got a sign of just how troubled when they started selling another silkscreened shirt.

This one featured a single Persian word, omid, or hope.

When they started showing customers the shirt, they got a divided reaction.

Some people loved it. But others thought they were being too hopeful and said things like, “Are you serious?”

Many Iranians are reluctant to place too much faith in today’s new moment of possibility, symbolized by the 2013 election of President Hassan Rouhani, who promised greater openness.

Far outside Tehran, in the city of Isfahan, we met a man who recalls another moment of anticipation.

Ahmad, a student who asked that we only use his first name, recalls the 2009 presidential election, when it seemed that a reform presidential candidate was likely to win. Instead, the reform side lost in a disputed vote count, and president Mahmoud Ahmadinejad remained in office.

“Personally, I really lost my, you know, hope,” he says. “Because many people my age wanted to make a new change, build a new country.”

But that didn’t happen.

“You know, the election is just something for decoration,” he adds. 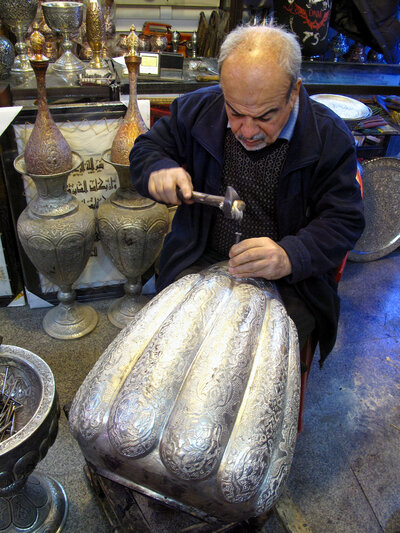 Asghar Pourheydar-Shirazi uses a hammer and a nail to engrave intricate patterns on a vase at his shop in Isfahan. He was optimistic following the country’s 1979 revolution, but says the economy has fared poorly for decades. At 64, he works 10 to 12 hour days. Molly Messick/NPR

Now, he expects only modest change from Rouhani. And though he has not given up on the country he loves, he is making plans to study abroad.

We spoke with Ahmad in a centuries-old square in Isfahan. Pointed arches surround that square. Little tourist shops fill many of the arches.

In one of those shops we found one more Iranian with his own approach to moments of anticipation and hope.

Asghar Pourheydar-Shirazi, was sitting on a chair, holding a hammer in one hand and a nail in the other. He was using them to etch patterns into the surface of a giant metal vase.

He’s engraving unbelievably intricate patterns, by hand, on a vase. It’s work he’s been doing for 50 years. He even said he could engrave an image of my face on the vase if I wanted.

“If I make a mistake it becomes a new design,” he says.

This too is a kind of metaphor for how Shirazi has survived in this business so long — and the way he gets by in Iran, where he says business has been poor for decades.

Shirazi recalls his own moment of anticipation. Shortly after Iran’s 1979 Islamic revolution, he says, business boomed.

Then came the Iran-Iraq war in the 1980s, which Shirazi went off to fight in and business has been weak ever since.

As with his work, Shirazi just adjusted to Iran’s economic mistakes. In the good times, he made a living working four or five hours a day. Now he works 10 to 12 hours. He’s 64 now, and has put five of his six children through college.

He quietly supports Iran’s president in his efforts to open up the country and the economy, but he hasn’t seen much change yet, and doesn’t seem to worry much about it anyway.

He just keeps working. When he finished talking he put down a spare nail and went back to cutting his patterns.