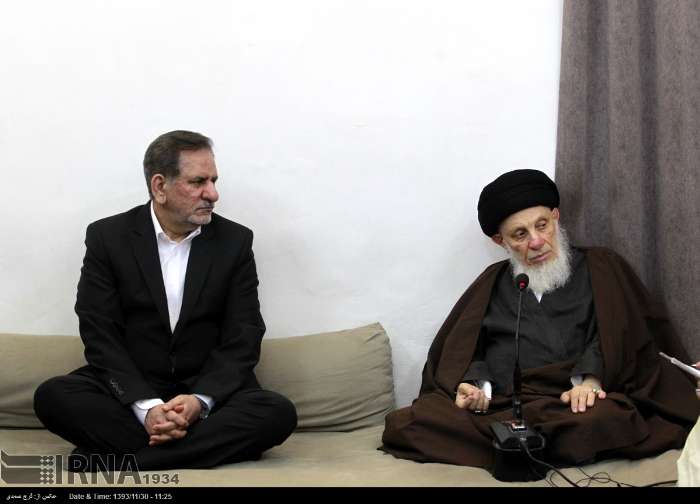 TEHRAN (Tasnim) – A senior Iraqi cleric voiced deep concerns over the spread of violence against Shiite Muslims in the region, saying that they are the main victims of terrorist activities carried out by the Islamic State in Iraq and the Levant (ISIL) group.

“What is happening in today’s world, is religious extremism whose symbol is the ISIL, and Shiites are the main targets of such extremism,” Grand Ayatollah Sayyid Muhammad Sa’id al-Hakim said in a meeting with visiting Iranian First Vice-President Eshaq Jahangiri in Iraq on Wednesday.

He further said that the international community, the UN and UN Security Council are not willing to accept that Shiites have been attacked and massacred by extremists and terrorists.

Ayatollah Hakim made it clear that Iran and Iraq are two strongholds of the Shiites and are needed to raise the issue of ongoing “oppression” against Shiites in the international bodies.

The Iranian vice-president, for his part, pointed to the plots hatched against Shiites, and said, “I hope that all of us will be able to fulfill our historic duty and defend the rights of Muslims, Shiites in particular.”