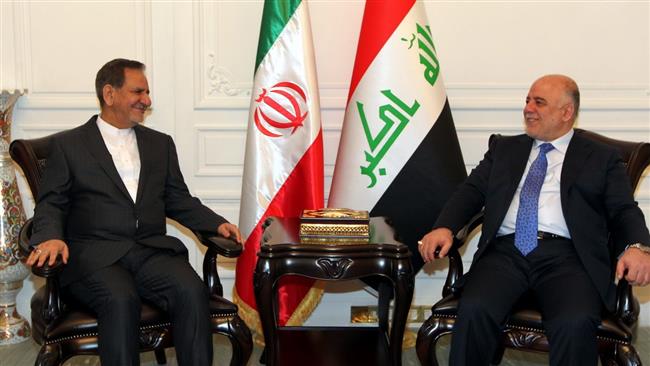 Iran and Iraq have warned against the danger of terrorism as the most important regional and international challenge, and expressed their opposition to double-standard policies on anti-terror campaign.

Tehran and Baghdad issued a joint statement on Wednesday at the end of a three-day visit by Iranian First Vice President Es’haq Jahangiri to Iraq upon an official invitation by the country’s Prime Minister Haider al-Abadi.

According to the statement, Iran and Iraq share a common stance on the ongoing security and political developments in the region and stress the importance of regular bilateral and multilateral consultation on ways to tackle security challenges.

It added that the two countries urge the expansion of political, security, economic and trade cooperation.

Iran and Iraq condemned the use of terrorists as a means to achieve political goals and called on all regional and international sides to seriously fight terrorism, the statement read.

The two countries urged other countries in the region to make joint positive efforts in order to find a peaceful and political solution to regional crises without any interference in countries’ internal affairs, the statement said.

Iran once again expressed its full support for the Iraqi government and nation in the battle against terrorism.

Heading a high-ranking politico-economic delegation, Jahangiri arrived in Iraq on Monday. During his stay in the country, the senior Iranian official held talks with senior Iraqi officials in Baghdad and senior Shia clerics in Najaf.