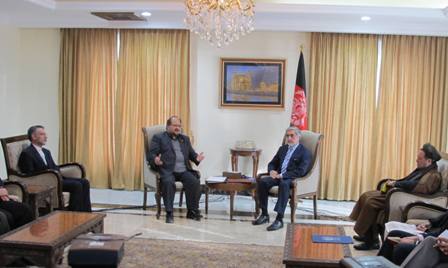 Shariatmadari is in Afghanistan to attend inaugural ceremony of a joint commercial exhibition in Kabul.

The exhibition is participated by over 100 Iranian companies.

Referring to the crimes made by terrorist group of Daesh (ISIS) in the region, particularly in Afghanistan, the Iranian official said their activities damage spiritual image of Islam.

He urged Muslim countries in the region to prevent the terrorist group of portraying Islam as a violent religion to the world.

Shariatmadari reiterated Tehran’s support for regional states, Afghanistan in particular, in their fights against the terrorist group.

Moreover, he added that Tehran and Kabul are to sign an agreement in the near future for security cooperation which will also include their cooperation in other fields such as economic, political, cultural and social activities.

Shariatmadari referred to the signing of the agreement which is to take place in Tehran as a historic event.

He said Afghanistan is a valuable neighbor for Iran.

Meanwhile, the Afghan official appreciated Tehran’s all-out support for Kabul during the past three decades.

He referred to holding of Iran-Afghanistan commercial exhibition in Kabul as a major step taken for promotion of bilateral economic relations.

Abdullah said although Iran is facing tough and unfair sanctions, it has never abandoned Afghanistan in its dark days.