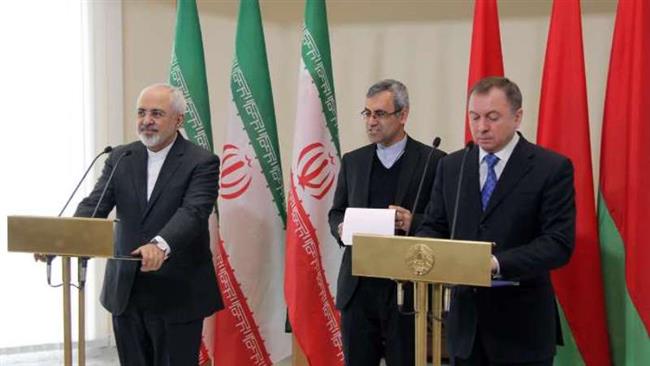 Iran and Belarus have agreed to expand their bilateral relations through an upcoming visit by the Belarusian head of state to the Islamic Republic.

“We enjoy good relations with Belarus in the political, cultural, and economic areas, and we agreed today to expand and deepen these ties through the visit by Mr. Alexander Lukashenko, the president of Belarus, to Tehran, which will take place in near future,” Zarif said.

During the visit, the Iranian forein minister inaugurated the new building of Iran’s embassy in the city during a ceremony, which was also attended by his Belarusian counterpart Vladimir Makei and other countries’ ambassadors.

Zarif said Iran’s policy is based on having friendly relations and constructive interaction with all of the countries of the world.

“The Islamic Republic of Iran extends the hand of cooperation and constructive and beneficial relation to all countries in the world.”

“The two countries support each other on the political arena and we will do so in the future too.”

During the visit, Zarif also met with the former Belarusian prime minister and speaker of the upper house of parliament, Mikhail Myasnikovich, who expressed readiness for the extension of parliamentary cooperation with Iran.