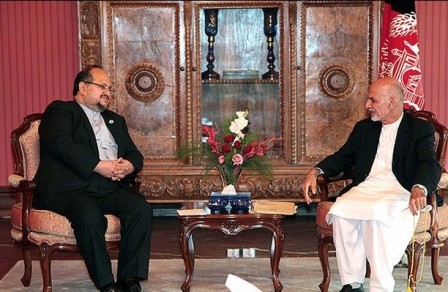 Afghanistan has constructive dialogue with Iran on Afghan migrants

Kabul, Feb 17, IRNA – Afghan government sees itself responsible for the issue of Afghan migrants living in Iran and is keen on constructive dialogue with Iran to solve the problems, President Mohammad Ashraf Ghani said on Tuesday.

The Afghan president made the remarks in a meeting with visiting Iran’s Vice-President Mohammad Shariatmadari.

The president said that Afghanistan is an active member of international community and in its foreign policy intends to have good relations with other states, especially its neighbors.

Ashraf Ghani said that upon invitation of President Rouhani he will visit Iran soon.

He added that Afghanistan will introduce one of its cabinet ministers to hold joint cooperation commission with Iran.

The commission will work on roadmap to consolidate bilateral relations in the fields of preventing different forms of terrorism and ways to fight terrorism, fight against drug trafficking, economic and transit cooperation, increasing trade, solving immigrants problems and cooperation about water resources.

The Iranian VP said that Iran is witnessing huge developments in its neighboring country of Afghanistan and is confident that the country is moving toward stability.

Shariatmadari added that Iran’s Interior Minister has been elected to chair the joint cooperation commission and the two sides will prepare roadmap for more bilateral cooperation.

The VP arrived in Kabul on Tuesday morning to inaugurate the second joint exhibition in the city.