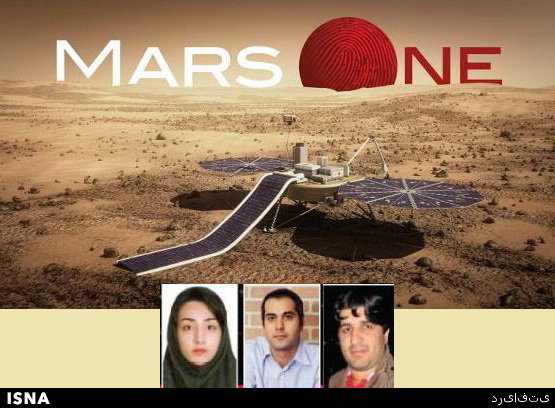 Three Iranian candidates selected out of 202.000 for Mars One project

TEHRAN (ISNA)- Three Iranians have been selected out of 202.000 candidates who have volunteered to join Mars One project to test their chance for being among the final four astronomers who are going to reside in Mars.

So far a hundred individuals have been selected for the project, three of them are from Iran.

They were picked via an online interview and were given a chance to show their work group spirit and motivation for the adventure.

The 100 selected volunteers include 39 Americans, 31 Europeans, 16 Asians, 7 Africans and 7 from Oceania. They are to live in a situation similar to that of Mars and pass different tests.

Mars One is a not-for-profit organization based in the Netherlands that has put forward conceptual plans to establish a permanent human colony on Mars by 2025, also having the first humans land on Mars and beating NASA’s Orion missions by a decade. The private spaceflight project is led by Dutch entrepreneur Bas Lansdorp, who announced plans for the Mars One mission in May 2012.

Mars One’s concept includes launching four carefully selected applicants in a Mars-bound spaceflight in 2024, to become the first residents of Mars, and that every step of the crew’s journey will be documented for a reality television program.

Planning for Mars One began in 2011 with discussions between the two founders, Bas Lansdorp and Arno Wielders. The feasibility of the idea was then researched with specialists and expert organizations, which discussed the financial, psychological and ethical aspects of it.