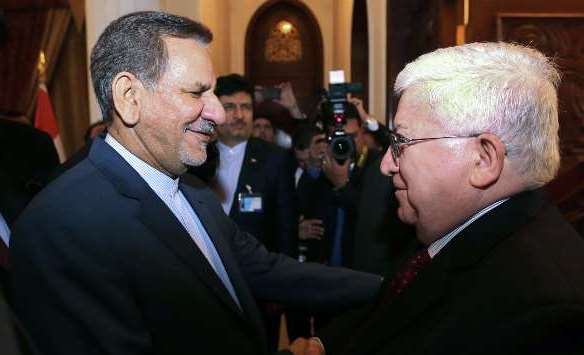 Iran renews all-out support for Iraq in fight against ISIL

“Iraq’s security means Iran’s security and Iran is always beside the Iraqi government and nation in good and hard times,” Jahangiri said during the meeting in Baghdad today.

He pointed to the presence of ISIL terrorist group in Iraq, and said the Takfiri terrorists have tainted the image of Islam.

The Iranian first vice-president stressed that ISIL should be fought and defeated not just through military means, but its ideology should also be confronted and stopped and its financial backups should also be cut.

“The people of Iraq and Syria are in the frontline of war against the ISIL and the international community should support them in this regard.”

Jahangiri, meantime, pointed to Iran-Iraq relations and said, the two countries should try to broaden their economic and trade ties in tandem with their amicable political ties.

The Iranian vice-president referred to the political plots hatched to sharply reduce the oil prices in the international markets, and said, “We have always tried to create an opportunity out of every sanction and now after the sharp decline in oil prices we announce that less than 30 percent of our budget relies on oil revenues.”

The Iraqi president, for his part, welcomed the Iranian delegation, and reminded that “Iran and Iraq have lengthy common borders and the two countries have age-old relations …”.

He pointed to the threat of terrorism, and said, “ISIL’s threat is not restricted to Iraq and the Takfiri terrorists are threatening all the regional nations.”

President Massoum, meantime, thanked Iran for helping Iraq in its fight against the ISIL, and expressed the hope that the two countries’ relations would further expand in future.

Jahangiri is on a three-day visit to Iraq at the invitation of the Iraqi prime minister.

Jahangiri also took part in a meeting of Iran-Iraq Joint High Commission for Cooperation which was co-chaired by premier al-Abadi.

Jahangiri will also attend an exclusive exhibition of Iran which is scheduled to be held on February 16-19.

The two sides would also explore mutual cooperation on trade, technical and engineering, power and energy, building, sanitation and medical training as well.