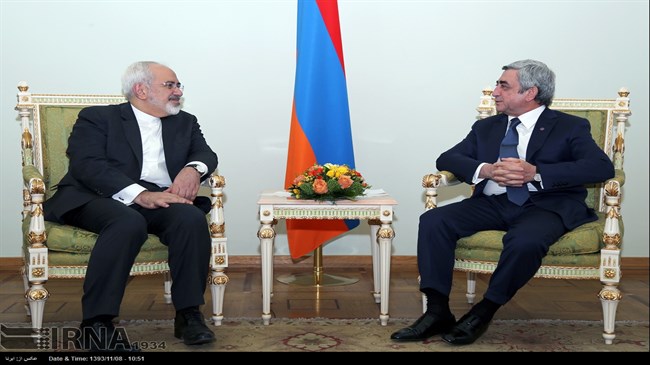 On January 27th 2015, the minister of foreign affairs of Iran, Mohammad Javad Zarif, paid a two-day visit to Armenia. Welcoming the foreign minister, Armenian President Serzh Sargsyan attached great importance to high-level reciprocal visits which, according to him, provide a good opportunity to discuss the agenda of Armenian-Iranian relations and the prospects for co-operation. Sargsyan noted that he warmly recalled his visit to the Islamic Republic of Iran in 2013 and the agreements made during his meeting with President Hassan Rouhani and added that Armenia was ready and keen on fulfilling them. He emphasised further enhancing of relations with the friendly state of Iran. Zarif underscored that Armenian-Iranian relations could set a good example for the world on how Muslim and Christian countries can reach peaceful symbiosis living side by side. Zarif noted that Iran is also keen on enhancing relations with Armenia as a friendly and reliable partner in all sectors. During his visit, Zarif had meetings with the prime minister, Hovik Abrahamyan, minister of foreign affairs, Edward Nalbandian and the president of the National Assembly of Armenia, Galust Sahakyan.

After Armenia declared independence in 1991, the country established relations with the Islamic Republic of Iran. In response to the dual blockade imposed by Turkey and Azerbaijan, Iran became a strategic route for Armenia in its international communications with the world. Taking into consideration the economic and energy potential of Iran, Armenia has focused on enhancing co-operation with its southern neighbour in order to counterbalance the Turkish-Azerbaijani blockade and to reduce the extremely high level of dependence upon Georgian transit routes. The fact, that the parties have established an Armenian-Iranian inter-governmental committee many years ago stresses the importance of that both countries put on bilateral relations.

In August 2013 when Iran was under pressure and sanctions by the international community, Sargsyan participated in the inauguration ceremony of Hassan Rouhani, the seventh president of Iran. Since 1991 more than 50 mutual visits have been paid by the two states (at the level of heads of states and governments, as well as ministers of foreign affairs), so these facts symbolise the willingness to continue the comprehensive co-operation.

During the most recent meeting, Zarif emphasised the importance of enhancing the economic and energy cooperation between the two states. In the framework of the 12th session of the inter-governmental committee in December 2014, the parties signed a protocol on the construction of a hydro-power station in Meghri, near the border. Iran is the second largest gas supplier for Armenia, thereby providing an alternative to Russian gas and securing energy security for Armenia. On the other hand Armenia is a potential route for Iranian exports to Russia and the EU, therefore economic co-operation may, to some extent, be called strategic.

Another important aspect of Zarif’s visit concerns Armenia’s accession to the Eurasian Economic Union (EEU) and the perspectives of Iranian-Armenian relations. On October 10th 2014, Armenia signed the membership agreement and became the fourth member of the EEU, along with Belarus, Kazakhstan and Russia. As the membership to this new geopolitical reality assumed both political and economic changes, it was of top importance for Armenia to harmonise the integration process with Armenian-Georgian and Armenian-Iranian relations. Despite the fact that Armenia and Georgia have chosen different integration paths, in 2014 the prime ministers of both countries, Abrahamyan and Garibashvili assured this fact will not undermine relations. In fact, this was very important for Armenian-Iranian relations as Armenia and Georgia play a transit role for Iranian foreign economic policy. During his visit to Yerevan, Zarif hoped that Armenia’s accession to the EEU will bolster bilateral ties.

Interestingly, Zarif’s visit followed a visit by Russian defence minister, Sergei Shoigu, to Iran between January 19th and 20th. There they signed an agreement on military co-operation between Iran and Russia, leading to some concern among western countries, especially the United States. It is quite obvious that Iran and Russia are trying to develop a greater strategic partnership in the Middle East. As to the economic aspect of bilateral relations, Russia and Iran aim at promoting their national interests via infrastructures to unite the two states. In this context Armenia may serve as a transit territory, especially after the EEU agreement came into force on January 1st 2015.

However, the key issue in Armenian-Iranian relations is a railway project that touches the national security issues of Armenia. The 305 kilometre-long railway from Armenia to Iran, to be named the Southern Armenian Railway (SAR), is estimated to cost some 3.2 billion US dollars. The high cost of the project is explained by the mountainous terrain through which it is supposed to pass. During his visit, the Iranian foreign minister confirmed that after solving some technical issues, the parties will launch the construction of the “strategic railway”. According to the Armenian government, the SAR will create the shortest transportation route from the ports of the Black Sea to the ports of the Persian Gulf and establish a major commodities transit corridor between Europe and the Persian Gulf.

If Iran and Armenia manage to implement the project, it will have both political and economic consequences not only for Armenia, but also for the entire South Caucasus. First of all, Armenia will successfully overcome the blockade imposed on it by Turkey and Azerbaijan and have access to a much less expensive Iranian market. Secondly, due to the Iranian railway network, Armenia can improve its foreign trade turnover with Central Asia and the Gulf states. Thirdly, Armenia will serve as a railway bridge between Georgia and Iran, thereby gaining some political and economic dividends. Fourthly, in case of the restoration of the Abkhazian railway (which does not work because of the Georgian-Abkhazian conflict), Armenia will obtain not only regional, but also international transit status, unifying the Black sea basin with Iran and the Persian Gulf. Lastly, much easier access to the gulf seaports will be available, helping diversify the way Armenian goods are exported.

The Nagorno-Karabakh peace regulation process was the other issue discussed in the framework of Zarif’s visit. The Nagorno-Karabakh Republic, which declared independence in 1991, borders Iran in the south along the Araxes River, therefore the Iranian official position towards the Armenian-Azerbaijani conflict is of great importance for Armenia. In 1992, the President of Iran, Akbar Hashemi Rafsanjani, hosted a meeting of leaders of Armenia and Azerbaijan, Levon Ter-Petrosyan and Yagub Mammadov. In Yerevan, the Iranian foreign minister reassured Iran’s balanced position towards the conflict and stressed the importance of peaceful regulation, based on the principles of the international law. The current high level of relations is, to some extent, stipulated by the existence of a well-organised and strong Armenian diaspora in Iran, actively engaged in the policymaking process of Iran.

The Azerbaijani factor has some political impact on Armenian-Iranian relations. Azerbaijan is the third state with a Shia Muslim majority, after with Iran and Iraq. Being a secular state, Azerbaijan tries to reduce the religious influence among the Azerbaijani population. The tense situation between the two states is much more conditioned by the Azerbaijani speaking minority, living in the northern parts of Iran which Azerbaijani officials claim to be historic Azerbaijani territory. Undoubtedly, the Iranian-Azerbaijani dispute is beneficial to Armenia and reinforces the role of Armenia in Iran’s foreign policy strategy.