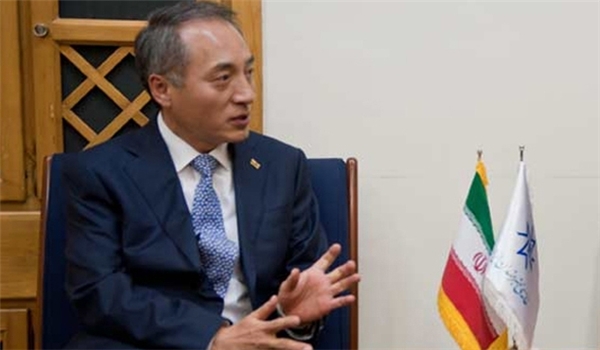 TEHRAN (FNA)- South Korean Ambassador to Iran Song Woong-Yeob announced that Seoul and Tehran are resolved to enhance their bilateral ties in different areas in the near future.

“There are many capacities in South Korea and Iran for boosting interactions,” the South Korean ambassador said in a meeting with economic activists in Qazvin province, Central Iran on Monday.

He noted that the two countries have good banking interactions that have resulted in boosting economic exchanges between Seoul and Tehran.

Song urged the South Korean and Iranian companies to boost their mutual cooperation, and said, “A sum of 2,000 Korean companies have economic relations with Iran at present.”

In June, the research centers of the Iranian and South Korean parliaments in a ceremony signed a memorandum of understanding (MoU) in Tehran to boost mutual cooperation.

Addressing the ceremony at the time, Iranian Parliament Speaker Ali Larijani expressed the hope that the MoU could lead to the development of cooperation between Iran and South Korea.

“Today, different issues, including international problems, influence the domestic situation of countries and research cooperation can be effective in their settlement,” the Iranian parliament speaker said.