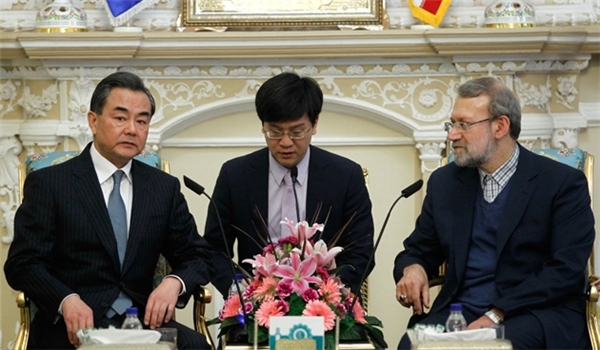 TEHRAN (FNA)- Iranian Parliament Speaker Ali Larijani stressed Tehran’s seriousness in its nuclear talks with the world powers, but meantime, voiced opposition to any further extension of the negotiations.

“The Islamic Republic of Iran is serious about reaching an agreement in the nuclear negotiations and doesn’t agree with the extension of negotiations,” Larijani said in a meeting with visiting Chinese Foreign Minister Wang Yi in Tehran on Monday.

He also underscored the necessity for the Group 5+1 (the US, Russia, China, Britain and France plus Germany) to show political will to reach an agreement with Iran.

Wang, for his part, stressed China’s commitment to the peaceful settlement of Iran’s nuclear issue under any conditions, and said he believed that an agreement should be reached which provides the interests of both sides.

“The West is using the nuclear issue as a pretext to prevent Iran’s progress and economic development,” he added.

In relevant remarks in January, Iranian Foreign Minister Mohammad Javad Zarif stressed the failure of the West’s pressure policy on Tehran, and said no one in Iran believes in the further extension of the nuclear talks with the world powers beyond the July deadline.

“I believe that the other side should understand this reality that if it wants to reach an agreement with Iran, it won’t be possible through keeping pressure, as Iranians don’t strike agreements under pressure,” Zarif told FNA.

Asked if extension of the nuclear talks after the upcoming deadline of July 10 would be among possible options, he said, “It is too difficult to imagine that this time can be extended again.”

“No one in the Islamic Republic seems to be ready for another extension in this round (of talks),” Zarif added.

He, meantime, described reaching a final deal with the G5+1 as “completely possible”, and said, “We don’t have any problems and our nuclear program is completely peaceful and all measures which are due to be adopted are aimed at ensuring them that this program is peaceful and no problem exists in this regard.”

The two sides decided to continue their talk in February without specifying the time and venue.