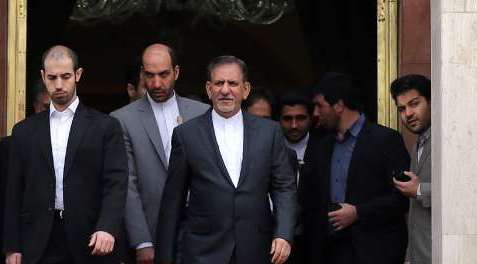 Jahangiri, heading a high-ranking delegation, left Tehran for Baghdad on Monday morning for a 3-day visit.

In an exclusive interview with IRNA, Hamoudi said the visit shows the importance of Tehran-Baghdad deep relations.

He said Iraq’s regional policies are based on cooperation with all neighboring countries, adding bilateral relations in current regional situation, especially in the war against terrorism and extremism is very important.

Hamoudi said the visit can strengthen bilateral relations, and the two sides will negotiate some joint cases in economic, political, and trade fields.

On the effect of Iran-Iraq relations on resolving regional crises, Hamoudi said it is quite natural that the two countries have a significant role in settling regional problems, especially Syria.

To a question on Iran-Iraq cooperation in the fight against terrorism, Hamoudi said terrorism and the crimes of extremists are among the most important problems of the region and will be the core of Jahangiri’s negotiations in Baghdad.

Stressing on the importance of collective cooperation of all regional countries to halt the spread of terrorism, Hamoudi said Iran-Iraq cooperation in this regard should include all neighbors of Iraq.

He also visits an Iranian fair in Baghdad on Tuesday and then goes for pilgrimage to the Holy cities of Najaf and Karbala.