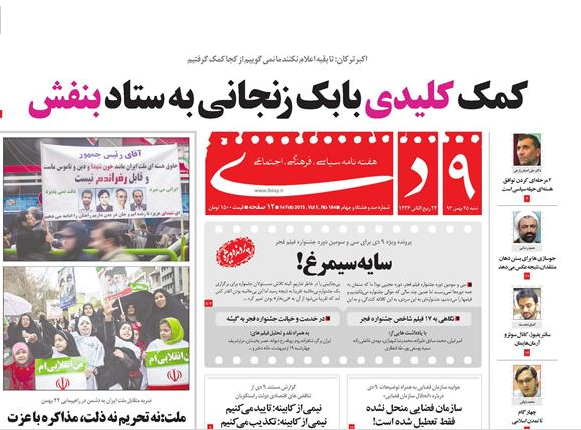 Iran’s ultra-conservative weekly “9-Day” was banned on Monday for criticising the government over its negotiations with world powers on the country’s controversial nuclear programme, the ISNA news agency reported.

The state body charged with monitoring the media ruled that the paper had published articles “insulting towards the Imam (Islamic republic founder Ayatollah Ruhollah Khomeini) and against the regime’s nuclear policy”, the agency said.

ISNA said the comment came after Zarif and his US counterpart Secretary of State John Kerry took a walk in the lakeside Swiss city of Geneva on the sidelines of nuclear talks there last month.

The hardline weekly directed by ultra-conservative parliamentarian Hamid Ressaie is a constant critic of the negotiations aimed at curbing Iran’s programme of uranium enrichment in exchange for lifting international sanctions.

It says that the government made too many concessions in the talks with world powers by signing an interim accord in November 2013.

Under the initial deal, Tehran froze some of its nuclear activity for a partial lifting of sanctions.

Iran and the P5+1 group (the United States, Russia, China, Britain and France plus Germany) are trying to hammer out a deal that would allow Iran to carry out civilian and exclusively peaceful nuclear activity, with the subsequent lifting of sanctions.

Two deadlines for a permanent agreement have already been missed since the 2013 interim deal.

Negotiators are now aiming for the political outline of a deal by March 31, with the cut-off point for the technical details of a comprehensive accord by June 30.