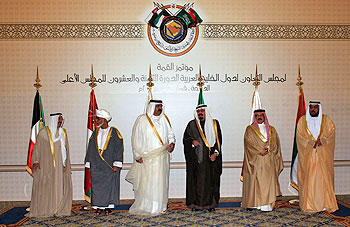 A common security policy among the states of the Gulf Cooperation Council—Bahrain, Kuwait, Oman, Qatar, Saudi Arabia, and the United Arab Emirates—was not considered at the initial stage. In fact, it came in the form of ad hoc responses to regional challenges. (Photo: Karim Jaafar / AFP-Getty Images)

While the nuclear talks between six global powers (China, France, Germany, Russia, the United Kingdom, and the United States, frequently referred to as the “P5+1”) and Iran proceed amidst advances and setbacks, the Gulf region is enmeshed in conflicts and potential threats. Calculations regarding the shifting geopolitical environment are in flux. The interim agreement—reached by the P5+1 and Iran on Tehran’s nuclear program in November 2013—has already created significant consequences for the monarchies of the western Persian Gulf and their attitude toward Iran. The GCC and Iran’s common enemy in Daesh (“Islamic State”) also has a considerable impact on the Gulf Arab monarchies’ relationship with the Islamic Republic of Iran.

For its part, the incumbent Iranian leadership has been trying to exploit the economic opportunities offered by the prospect of sanctions lifting as an incentive to strengthen ties with the Gulf Cooperation Council (GCC) members and initiate far more ambitious talks with them. The aim, as often reiterated by President Hassan Rouhani and even by Supreme Leader Ayatollah Ali Khamenei, is for Iran to become a legitimate, full-fledged interlocutor in all regional security matters. Of course, this is not an easy task. Tehran would have to win the GCC leaders’ trust and several of them—most notably Bahrain and Saudi Arabia—see Iran as a heavily destabilizing and predatory force within the region.

The rise of Daesh in Syria and Iraq has provided the opportunity to test the good will of Iran and the scope for regional cooperation in safeguarding the Gulf’s security. Tehran has been sharing information with regional powers, including with its historical rival Saudi Arabia, regarding Iranian strategy and moves in the fight. Yet, this may well turn into an issue-based tactic with limited cooperation.

The long-term perspective remains nebulous as the six GCC members hold no unified position vis-à-vis Iran. Given each Gulf Arab monarchy’s unique geopolitical challenges, internal dynamics, and history with Iran/Persia, the prospect of a thaw in GCC-Iran relations receives a broad range of reactions from rulers in Manama, Kuwait City, Muscat, Doha, Riyadh, and Abu Dhabi.