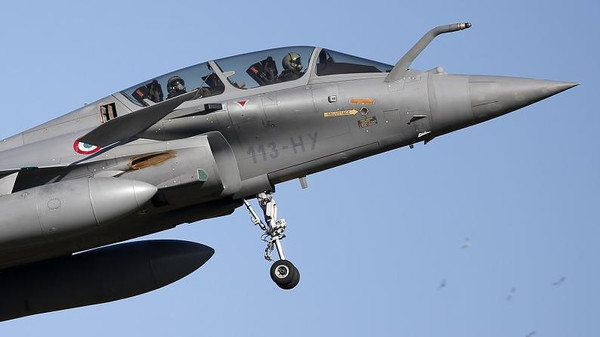 A Rafale fighter jet prepares to land at the air base in Saint-Dizier February 13, 2015. France’s President said Egypt would order 24 Rafale fighter jets, a naval frigate and related military equipment in a deal to be signed in Cairo on Monday worth more than 5 billion euros ($5.70 billion). The contract would make Egypt, aiming to upgrade its military hardware amid fears the crisis in neighbouring Libya could spill over, the first export customer for the warplane, built by Dassault Aviation. REUTERS/Charles Platiau (FRANCE – Tags: TRANSPORT BUSINESS MILITARY POLITICS)

Egypt’s military said it bombed ISIS targets in Libya at dawn on Monday, following a video showing the execution of a group of Egyptian Copts by the militant group.

“Your armed forces on Monday carried out focused air strikes in Libya against Daesh camps, places of gathering and training, and weapons depots,” the military said in a statement, using the Arabic acronym for ISIS.

State television showed footage of Egyptian fighter jets it said were taking off to conduct the strikes. In a statement to Al Arabiya News Channel, a Libyan air defense official said the Egyptian strikes on ISIS occurred in coordination with the Libyan army.

“Egypt and Libya are fighting one war,” the official stated. 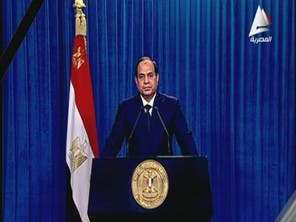 Sisi had given a televised address, saying that Egypt and the world are facing “ferocious threats.” (Egyptian state TV)

“The air strikes hit their targets precisely, and the falcons of our air forces returned safely to their bases,” the military’s statement said.

“We affirm that avenging Egyptian blood and retaliating against criminals and killers is a duty we must carry out.” 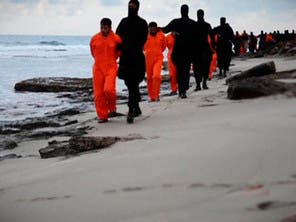 Men in orange jumpsuits purported to be Egyptian Christians held captive by the ISIS are marched by armed men along a beach said to be near Tripoli, in this still image from an undated video made available on social media on February 15, 2015. (Reuters)

Following the release of the video, Sisi had given a televised address, saying that Egypt and the world are facing “ferocious threats” hailing from radical militants, who are “devoid of any humane sense.”

He said his country reserved the right to “punish these murderers” as he called a meeting of security chiefs and declared seven days of mourning after the video was distributed by militants on social media.

Egypt’s Coptic Orthodox church said it was “confident” that those who purportedly beheaded a group of Egyptian Copts in Libya will be punished.

“The Orthodox church … is confident its homeland would not rest until the evil perpetrators get their fair retribution for their wicked crime,” the Coptic church said in a statement on its Facebook page.

On Sunday, militants from the Islamic State of Iraq and Syria (ISIS) 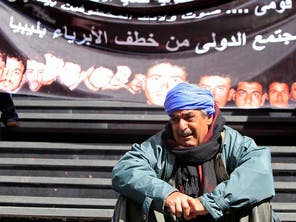 Family member of one of 27 Egyptian Coptic Christian workers who have been kidnapped in the Libyan city of Sirte, sits crying in front of a banner with pictures of the workers, in Cairo. (Reuters)

The footage shows 21 handcuffed hostages wearing orange jumpsuits being beheaded by their black-suited captors on a beach the group said was in the Libyan province of Tripoli.

In a separate development, the United States condemned as “despicable” the beheading of the 21 men.

“ISIS’s barbarity knows no bounds. It is unconstrained by faith, sect, or ethnicity,” Earnest added, saying the latest bloodshed “only further galvanizes the international community to unite against ISIS”. 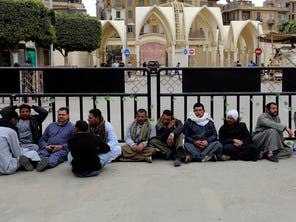 Family members of 27 Egyptian Coptic Christian workers kidnapped in the Libyan city of Sirte, take part in a sit-in inside the compound of Saint Mark’s Coptic Orthodox Cathedral to call for the release of their relatives, in Cairo. (Reuters)

“This heinous act once again underscores the urgent need for a political resolution to the conflict in Libya,” Earnest said.