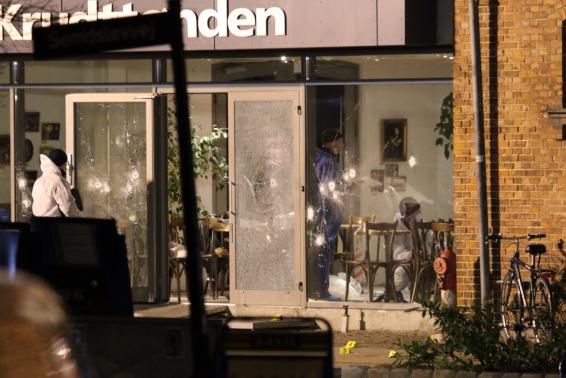 Forensic investigators are seen at the site of a shooting in Copenhagen February 14, 2015.
CREDIT: REUTERS/MATHIAS OEGENDAL/SCANPIX DENMARK

Police are investigating whether the man was behind the shootings.

Lars Vilks, the Swedish cartoonist whose controversial caricatures of the Prophet Mohammed sparked worldwide protests in 2007, had been among the speakers at the Krudttoenden cultural centre when a man opened fire Saturday.

A 55-year-old civilian was killed when the gunman sprayed bullets at the cultural centre, while a young Jewish man was gunned down outside the synagogue in central Copenhagen early Sunday.

Five police officers were wounded in the two attacks.

A massive police manhunt was launched after the gunman fled the scene following both shootings.

Early Sunday, police said they had shot and killed a man after he fired at officers in the inner-city neighbourhood of Noerrebro, where police had been keeping an address under observation.

“The police are now investigating if the person could be behind the shootings at Krudttoenden and the synagogue in Krystalgade,” police said in a statement.

Police said they did not yet have enough information to confirm whether the two gun attacks, which come just weeks after a series of bloody Islamist attacks in Paris that left 17 people dead, were connected.

Danish Prime Minister Prime Minister Helle Thorning-Schmidt described the assault on the free speech seminar as “a terrorist attack”, while the United States branded it “deplorable”.

Police spokesman Allan Teddy Wadsworth-Hansen had declined to say earlier Sunday whether detectives were looking for the same gunman for both attacks.

“We simply don’t know that and it’s too early to comment on at the moment,” he told a press conference.

He confirmed that the person killed in the second incident had been immediately outside the synagogue.

Michael Gelvan, chairman of the Nordic Jewish Security Council, told AFP the victim was a young Jewish man who had been providing security for a ceremony at the temple.

Danish police had released a photo of the suspect in the cultural centre attack, wearing a dark jacket and a maroon balaclava and carrying a black bag.

They described him as 25-30 years old and around 1.85 metres (six feet) tall, with an athletic build.

Police said the gunman who fled the scene of the second shooting had been wearing black trousers, black shoes and a light grey jacket with “multi-coloured” parts.

The central area of Copenhagen that is home to both the synagogue and Noerreport station, the country’s busiest rail hub, was cordoned off by police carrying machine guns. People living in the area were turned away.

Swedish security services told AFP they were on alert for any attempt by a suspect to cross the bridge linking Denmark with Sweden.

The windows of the cultural centre were pockmarked by multiple bullet holes, and the BBC released chilling audio of the moment a speaker at the event was interrupted by a volley of gunshots.

France’s ambassador to Denmark Francois Zimeray, who was present at the debate but was not hurt, told AFP the shooting was an attempt to replicate the January 7 attack on the Charlie Hebdo satirical magazine in Paris which killed 12 people.

“They shot from the outside (and) had the same intention as Charlie Hebdo, only they didn’t manage to get in,” he said.

“Intuitively I would say there were at least 50 gunshots, and the police here are saying 200,” he said.

“Bullets went through the doors and everyone threw themselves to the floor.”

Police initially said two suspects had fled the cultural centre in a Volkswagen Polo. The car was found abandoned around two hours after the attack.

After witness statements indicated there was just one attacker, police later said they were hunting for a lone gunman for the cultural centre assault.

“Everything leads us to believe that the shooting was a political attack and therefore a terrorist act,” the Danish premier said in a statement.

The shootings come at a time of heightened security and rising fears of Islamist violence in Europe.

Dozens of suspected jihadists have been arrested across Europe since mid-January and stocks of weapons and explosives have been uncovered.

Vilks has been living under police protection after his controversial cartoons prompted death threats.

Charlie Hebdo columnist Patrick Pelloux voiced dismay over the attack at the debate Vilks had been attending, saying: “We are all Danish tonight.”

He urged artists not to succumb to self-censorship out of fear, telling AFP: “We must stand firm and not be afraid.”