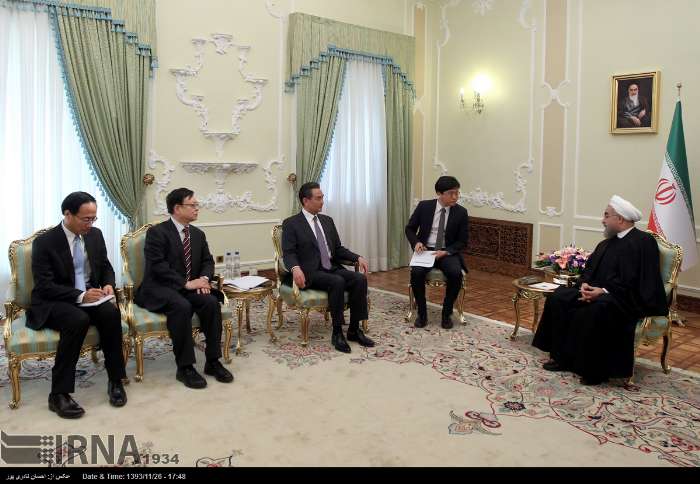 Tehran, Feb 15, IRNA – President Hassan Rouhani on Sunday that Iran expects China to help settle nuclear dispute with the western governments. He said that they must show political will for the purpose.

President Rouhani made the remarks in a meeting with the Chinese Foreign Minister Wang Yi.

He said that the strategic Tehran-Beijing cooperation is of significance for expansion of regional security and stability.

‘China has always had a very good cooperation with the Islamic Republic of Iran and in the current period, we need to lead the relations towards the establishment of comprehensive strategic cooperation,’ said the Iranian president.

He expressed hope that China’s cooperation in the framework of the Iran-Group 5+1 (UN Security Council permanent members plus Germany) will lead to materializing the Iranian nation’s rights in a comprehensive agreement.

The Chinese foreign minister conveyed the Chinese president’s warm greetings to his Iranian counterpart and emphasized Beijing’s strong will for boosting comprehensive, long term, and strategic relations with Iran.

Foreign Minister Wang Yi referred to the upcoming visit to Tehran of Chinese president, saying that keeping in mind the defined objectives for the visit it can leave historical effects on bilateral relations and in other words the opening of a new chapter in Iran-China ties.

On Iran’s nuclear activities and some governments’ counterproductive efforts to block its path, the Chinese top diplomat said that the Leader of Islamic Revolution and President Rouhani have both many times emphasized that the Iranian nuclear activities are merely for peaceful purposes, and not for manufacturing nuclear weapons.

‘This approach is very effective in resolving Iran’s nuclear dispute,’ he added, hoping for near future signing of a comprehensive agreement on the issue.

He said that such an agreement will end foreign intervention in the path of Iran’s development and Iran will as a very important regional country play more important role in the regional and international scenes.