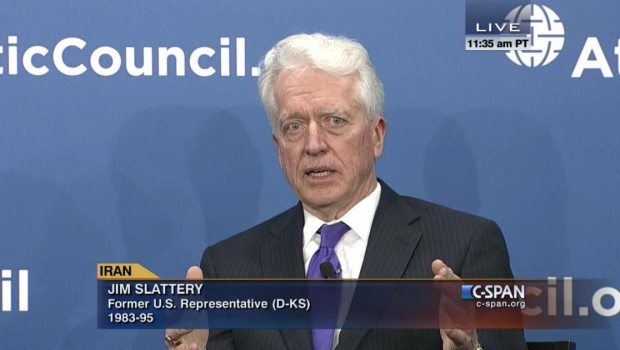 Former Kansas congressman returns from Iran with a message

“Imagine a positive relationship with Iran. Imagine what that might mean for the Middle East,” former US Congressman Jim Slattery said on Monday in remarks to the Atlantic Council here in Washington, DC.

Slattery, who represented Kansas’ 2nd District from 1983 to 1995, recently returned from a trip to Iran where he had been invited to address the World Against Violent Extremism conference, an initiative of President Hassan Rouhani. The former congressman has been heavily involved for the past decade in a “Track 2” diplomatic initiative called the Abrahamic Dialogue, which is based at Catholic University of America.

Slattery’s trip was historic in that it was the first time a former or current elected U.S. official has traveled to Iran. Despite the unprecedented nature of the visit, his trip has received little public or media attention to date.

In his remarks at the Council, Slattery called on both the Iranian government and the Obama administration to do more to facilitate “Track 2” diplomacy. “We don’t do what we should be doing to encourage direct dialogue between members of the Majlis and members of Congress,” he said.

“I agree with [Chairman of the U.S. Joint Chiefs of Staff] Gen. [Martin] Dempsey, who has said they [the Iranian leadership] are rational,” Slattery said, adding that it was critical that they be engaged in a respectful manner given the fact that, for well over the past century, Iran was under the influence of foreign powers—Russia, the UK, and the US.

“If you want to engage Iranians, it’s very easy. You preface any conversation with ‘help me understand’ whatever it is you want to talk about,” Slattery suggested.

He also sought to dispel the myth that Iran is unsafe for Americans by comparing his time in Iran to his time as an election observer in Iraq. While in Iraq he was forced to travel with 15 bodyguards and five armored vehicles, in Iran he was able to walk the streets freely and even spent time in Tehran’s famous bazaar where he was able to easily engage with shoppers and shopkeepers.

Like President Dwight Eisenhower, another Kansan, Slattery believes in the power of people-to- people diplomacy. The relationships that are built through such interactions can be helpful if a crisis arises.

On the nuclear negotiations front, Slattery “detected a great flexibility on the part of the Iranians on technical enrichment issues.” But that flexibility was “tied to sanctions relief and when they’ll be lifted.”

“The Rouhani government really wants to get this right,” Slattery maintains. It believes a deal would allow both sides to quickly address wider regional issues. But he’s also aware that there are parties on both sides that can scuttle a deal. He’s wary that there’s a rush to prejudge the deal, especially when the deal itself hasn’t been struck yet and, in any event, no specific details have been released.

Signaling an End of an Era

While Slattery’s trip doesn’t necessarily herald any immediate changes, it hints at the possibility for more trips by former or current U.S. officials down the road, according to Negar Mortazavi, a New York-based Iranian-American journalist. This would allow for a deeper and more developed engagement between Iranians and Americans on a “Track 2” level.

“This is a signal from the Iranian government that the era of hostage taking is over,” Mortazavi told me in a telephone interview.

But the move from inviting Slattery, who is already well known to Iranians as a result of his association with the Abrahamic Dialogue, to inviting other former officials isn’t likely to materialize overnight. Before anything can happen, a nuclear deal is probably essential. And that remains uncertain.

It’s also important that Slattery is from Kansas, she explained. “Kansas is a portion of the country that doesn’t have easy access to regular interaction with the Middle East, much less Iran.” Slattery’s experience in Iran gives that portion of America the opportunity to start to understand Iran.

At the moment, Americans are still far behind Iranians in their knowledge of the “Other.” On the Iranian side, there’s a much larger pool of experience of traveling and living in the US. This was illustrated by Slattery’s own experience in traveling to Iran.

When Slattery went to obtain a visa from the Iranian Interest Section at the Pakistani Embassy in Washington, DC, two of the three interviewers he met with had studied at Kansas State University. And on his first night in Tehran, he dined with Iran’s deputy nuclear negotiator, Majid Ravanchi, who had attended the University of Kansas while Slattery was in Congress.

“One of the sad realities is that very few members of Congress and the Obama administration have personal relationships with Iranians,” Slattery lamented. (Valerie Jarrett, senior advisor to President Obama, was born in Iran, but left when she was five years old.

“Americans are in a kind of black box when it comes to experience with Iranian culture. There aren’t any in Congress with the same kind of deep immersion in Iran that some Iranian officials have with America,” Mortazavi said, echoing Slattery’s sentiment. “They’re still stuck with the 80’s vision of Revolutionary Iran.”

But Slattery’s visit does “chip away at the barrier between the countries that enabled so much mistrust, misinformation, and animosity,” remarked Jamal Abdi, policy director at the National Iranian American Council, a pro-diplomacy advocacy group.

There’s no doubt that “Track 2” initiatives are helpful in building bridges and jumpstarting peace efforts. But there are limits.

“I don’t think his visit will convince the most reflexively anti-Iran diplomacy lawmakers to reconsider new sanctions,” Abdi told me.

That’s a concern with “Track 2” initiatives. Once they get going, they may produce a great deal of promising ideas, but the question lies more with implementation. It’s up to the people who participate. But if there’s no mechanism to implement the suggested initiatives, the process won’t get far.

“You have to ask: who can put the ideas into the policy bloodstream, who can implement the proposals?” Matt Duss, president of the Foundation for Middle East Peace, explains.

Although the former congressman may not be able to directly affect the debate, Abdi thinks that Slattery’s experience “can help encourage lawmakers who are on the fence start rethinking what’s possible for US-Iran relations.”

But if we learn anything, politics, much like physics, will always have an opposing force. There will be groups that are unhappy no matter the outcome. That goes for both the US and Iran.

At the moment, it remains to be seen how Slattery’s experience will be used to push back on the pro-sanctions/anti-diplomacy caucus in Congress goes. What we do know is that a pathway for more interaction on a “Track 2” level has opened. And the likelihood of more visits like Slattery’s has increased.