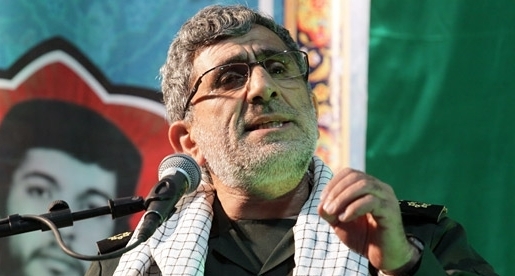 TEHRAN (FNA)- Lieutenant Commander of the Islamic Revolution Guards Corps (IRGC) Quds Force Brigadier General Esmayeel Qa’ani stressed that Muslim resistance and campaign in the past decade has made Israel and its allies retreat from their positions.

“Since the year 2000, Muslim’s offsprings have given such a slap across the face of the corrupt and fake Zionist regime that it has retreated day by day,” Qa’ani said, addressing a gathering in the Northeastern city of Mashhad on Saturday.

He also noted that Israel’s main ally, the US, has also failed in its plots against the Islamic Revolution everywhere, including Afghanistan, Iraq or Lebanon.

Iranian officials and military commanders have always underlined the country’s support and assistance with the Muslim regional states in their fight against Israel.

In relevant remarks in January, Supreme Leader of the Islamic Revolution Ayatollah Seyed Ali Khamenei underlined Iran’s firm will to continue support for the resistance movements in Palestine till their final victory over Israel.

“The Islamic Republic of Iran will stand firm (by Palestine) until the day when the cause of Palestine is realized, and our youths will certainly see that day,” Ayatollah Khamenei said in a meeting with Secretary General of the Popular Front for the Liberation of Palestine (PFLP) Ahmed Jibril in Tehran.

The Leader commended efforts by the PFLP’s chief to materialize the Palestinian cause, describing him as “one of the pillars of the issue of Palestine”.

Ayatollah Khamenei expressed the hope that Jibril would “continue resistance with this spirit until the final victory”.

Jibril, for his part, said the Islamic Revolution has changed Iran into an effective country in the international arena.

The PFLP’s chief also appreciated Iran’s principled stance on the restoration of the Palestinian people’s rights.