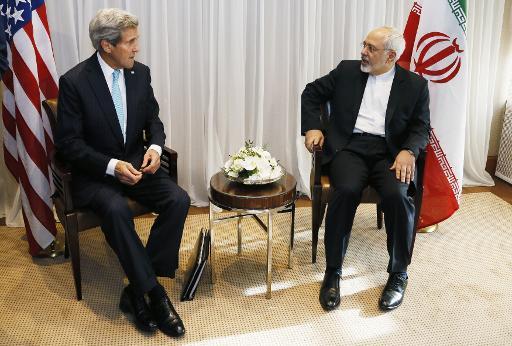 Iran negotiator told to control temper in talks with Kerry

Mohammad Javad Zarif admitted that he has often raised his voice during meetings with U.S. Secretary of State John Kerry – sometimes so much their bodyguards would enter the room to make sure everything was all right.

Zarif said Ayatollah Ali Khamenei, who has the final say on all state matters in Iran, told him to speak softly and with a smile – the same as he would in public.

Zarif said in comments published in the Shargh daily newspaper Saturday that Khamenei made the recommandations during a private meeting earlier this week.

“The exalted Supreme Leader told me not to quarrel … he asked: `Why do you scream? Smile and speak your mind,'” the newspaper quoted Zarif as telling a group of Tehran high school students.

Iran and the world powers – the U.S., Russia, China, Britain, France and Germany – hope to reach a rough deal on Iran’s disputed nuclear program by March and a final agreement by June 30.

Zarif and his team enjoy public support from Khamenei but Iran’s top leader has also warned that no agreement is better than an agreement that doesn’t meet Iran’s interests.

Issues still being debated, according to Iranian officials, include the size of Iran’s future enriched uranium output. The U.S. insists that it be cut in half; Tehran is ready for a reduction of only around 20 percent, according to the diplomats, speaking on condition of anonymity because they weren’t allowed to brief the media.

Hard-liners in Iran’s parliament remain highly suspicious of the negotiations and accuse Zarif of being too soft. Zarif was recently criticized by some parliamentarians for being photographed taking a friendly walk in Geneva with Kerry during a break in negotiations.