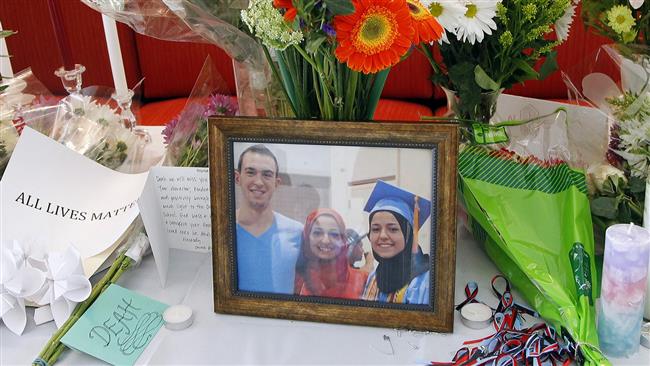 A makeshift memorial for the victims at the University of North Carolina.

The murders of three Muslim students on Tuesday in North Carolina is a result of the relentless demonization of Muslims by the mainstream media in the United States, says a political commentator and Lutheran pastor in San Antonio, Texas.

Commenting to Press TV on Wednesday, Mark Dankof – a broadcaster and former US Senate candidate – said, “We are awaiting the complete facts in regard to this gunman and why he did this, but certainly on a preliminary basis, it would appear to be a so-called hate crime.”

“I am not terribly surprised about this, because if one follows the mainstream media… in the United States, there has been a constant spin on the Middle East and on Islam, which is designed to provoke these very feelings on the part of most Americans,” he said.

“So if we look at all of this, it paints a very, very ugly picture of what’s happening, and I think we are going to see more of it,” he noted.

“I think eventually when there’s a full-blown war… in the Middle East, that involves a major American military commitment beyond anything that we have seen up to this point, possibly in conjunction with the tragic situation developing between the United States and Russia over Ukraine, I would say that Muslim Americans and Muslims generally in the United States are going to be subjected to very draconian official measures,” Dankof warned.

The father of the two female students shot dead by Hicks said on Wednesday that the killings were motivated by hatred against Muslims. “This was a hate crime.”

“This man had picked on my daughter and her husband a couple of times before, and he talked with them with his gun in his belt,” said Mohammad Abu-Salha, the psychiatrist father of the two young Muslim women.

Dankof said, “I think this is the future, it is a very dreadful future,” adding that “what happened in the Chapel Hill, North Carolina, needs to be contextualized, needs to be understood.”

“People need to be stepped back from it and see that essentially what has transpired here is a result of media spin, and that media spin is going to continue. There’s going to be more of it,” he stated.

“The average American still has no idea of why we are in the Middle East, and what the Islamic religion… is really all about,” he pointed out.