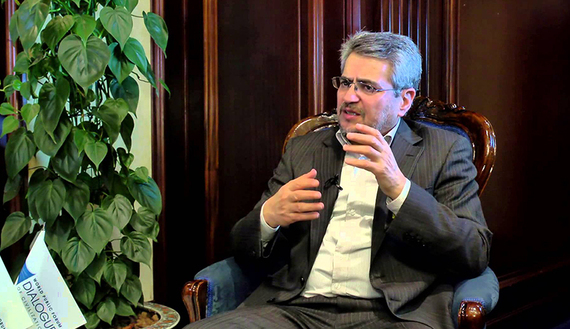 Iran’s newly appointed ambassador to the United Nations is facing criticism for his anti-Israel views and past comments urging Muslims to “unite around resistance” to the Jewish state.

Iranian diplomat Gholamali Khoshroo, a relative of President Hassan Rouhani, was appointed to the post in late January, after more than a year of controversy over Tehran’s previous pick, Hamid Abutalebi, whom the United States refused to grant a visa due to his connections to the 1979 hostage crisis at the U.S. embassy in Tehran.

Khoshroo, a diplomat who previously studied in New York City, has served in various positions in the Iranian foreign ministry and government, including most recently as its ambassador to Switzerland.

While touted by some as a more moderate choice for the post, Khoshroo has displayed much of the anti-Israel animus common among Iran’s leading politicians and diplomats, according to his past remarks.

Khoshroo, for instance, recently dubbed Israel as the “main problem” in the Middle East and urged Muslims to “unite around resistance” to it, according to comments reported in July 2013 by the Iranian press.

“In my view if we focus on the main problem of the region (Middle East) which is Israel, then Islamic and Arab countries can unite around resistance against Israel, get back their pride and please their people,” Khoshroo said, according to an independent translation of his remarks.

“If countries in the region, depend on their own potentials and abilities to resolve their social-economic problem they will not need U.S.,” he said. “If Iran, Turkey, Egypt, and Saudi Arabia work together, our region becomes strong and a billion Muslims will benefit from such collaboration.”

In a September 2013 remarks, Khoshroo stated that the President Obama could solve America’s problems with Iran by putting “some distance” between the United States and the “Zionist lobby,” according to Iranian reports.

While Khoshroo is not often quoted in public, his anti-Israel rhetoric aligns with the views of top Iranian leaders, such as Rouhani and Foreign Minister Javad Zarif, who is the lead negotiator in talks with the West over Iran’s contested nuclear program.

“Based on the few public comments made by Khoshroo, one can easily see that he is aligned with Zarif and Rouhani’s strategy, which is to convince the U.S. that its national interests and security is better served and guaranteed if the U.S. puts more distance between itself and Israel, and instead recognizes Iran as a dominant regional power, which is extremely anti-Israel,” Saeed Ghasseminejad, an Iranian dissident and fellow at the Foundation for Defense of Democracies (FDD), said.

Khoshroo’s appointment also signals that Iran may be seeking to increase its ties to liberal interests inside the United States, according to Ghasseminejad.

Rouhani’s camp believes it can ally with sympathetic factions in the United States who view Iran as a potential partner in the Middle East, according to Ghasseminejad.

“We can expect Iran to pursue a more active and aggressive policy of expanding its lobbying activities in U.S. and getting closer to left liberals, libertarians, isolationists, and the business community,” he said.

Khoshroo previously studied sociology at Tehran University and then at the New School for Social Research in New York, according to Al Monitor. His son is married to Rouhani’s niece.

Iran’s previous selection of Abutalebi for the U.N. post quickly criticized by the international community and rejected by the United States, which refused to grant him a visa due to his role in taking 52 Americans hostage during the 1979 revolution in Iran.

Iran vowed to take legal action as a result of this move and reiterated in its latest statement announcing the appointment of Khoshroo that it is still pursuing this action.