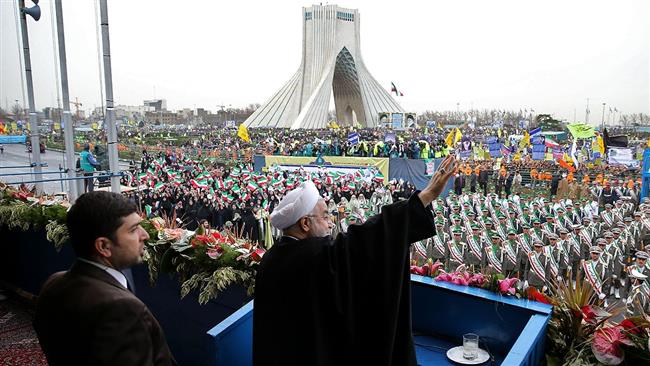 Addressing a massive gathering of people celebrating the victory of the 1979 Islamic Revolution in Tehran on Wednesday, President Rouhani said Iran has made great strides in the energy sector by increasing its oil production from 2.7 million barrels a day last year to 2.9 million this year, and boosting its natural gas output by 100mcm/d in the same period.

He also said Iran’s natural gas production will see another jump of 100mcm/d by the next Iranian calendar year (starting March 21).

Iran’s current production of natural gas reportedly stands at 600mcm/d and its consumption of gas revolves around 500mcm/d.

A senior Iranian energy official said recently that the country is poised to double its natural gas output by 2017 even if the Western sanctions remain in place.

Regarding economy, President Rouhani noted that Iran experienced a negative growth in the past couple of years, but expressed hope that the country would see a positive trend by the turn of the current year (ending March 20).

Rouhani also touched on other issues of concern including the environment, where he said dozens of Iranian power plants were made to lower their liquid fuel feeds so as to decrease pollution in major cities by 30 percent.

Iran’s Chief Executive further pointed out that his administration had managed to help release some 12 billion dollars of the country’s oil revenues blocked overseas due to anti-Iran sanctions.