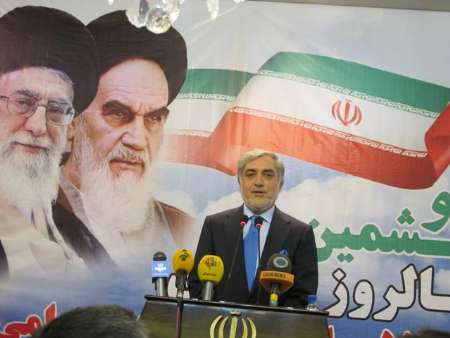 Addressing a ceremony at Iran’s embassy in Kabul to mark the 36th victory anniversary of the Islamic Revolution, Abdullah said that Afghan people began fighting terrorism and extremism years ago and the governments shouldn’t think that the campaign against terrorism came into existence in 2001.

The government of the friendly and brotherly neighboring country of Iran has stood by Afghanistan’s nation during tough times, Abdullah said.

Congratulating the Iranian nation and government, particularly Supreme Leader Ayatollah Ali Khamenei, on the occasion of the anniversary of the victory of the 1979 Islamic Revolution, Abdullah described the revolution as ‘great’ having ultra-regional impacts on awakening people of the world and contributing to freedom seeking of nations.

‘At the time of the victory of the Islamic Revolution I was a university student and I well remember that at the same time unpleasant events were underway in Afghanistan and Jihad of Afghan people against the former Soviet Union started,’ Abdullah said.

The victory of the Islamic Revolution motivated the Afghan youth to fight for their freedom, Abdullah added.

He said that ever since Islamic Republic of Iran has stood by Afghan people in their fight to gain their freedom and independence.