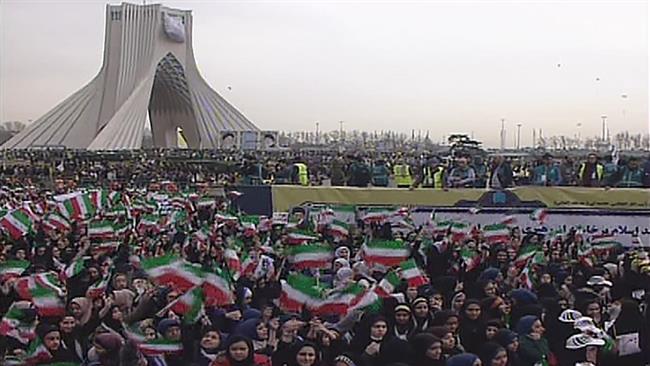 36 years after the revolution, where is Iran now?

Iranians rally in Tehran to mark the victory of the 1979 Islamic Revolution, February 11, 2015.

The Iranian nation toppled the US-backed Pahlavi regime in 1979, ending virtually 2,500 years of monarchical rule, and will see nationwide rallies on Feb. 11, the anniversary of the Islamic Revolution. In the 36 years since mass protests deposed the monarchy in Iran, the country has struggled with immense challenges. After the Islamic Republic’s establishment by way of a popular referendum, Iran endured a period of chaotic instability, with various armed factions seeking to undermine the nascent government.

Amid this volatility, Iran was invaded by Saddam Hussein’s Iraq, whose army was supported by most global powers and against whose aggression Iranians of all walks of life defended their country. After the devastatingly costly war — during which hundreds of thousands of Iranians and Iraqis died, many under the barrage of Saddam’s chemical weapons — the country started the arduous process of attempting to rebuild.

Any endeavors toward a speedy recovery, however, were thrashed by increased Western sanctions, as a clear and persistent strategy of coercion was seemingly put into full-throttle against Iran. Since then, Iran’s tensions with the West have unfortunately only further escalated, and the country has faced a more or less all-out economic war waged upon it, which has been complemented by numerous covert actions in the form of assassinations and bomb attacks and even cyberattacks.

Yet, despite all of these crises, Iran has persevered. It emerged from the Iran-Iraq War without giving up an inch of its soil in spite of the all-out support given to the aggressor by the superpowers and even regional Arab countries. It also did this without resorting to the use of chemical weapons, even as it had the capability to do so, as the country is signatory to all weapons of mass destruction conventions. Iran has since managed to become one of the rare countries able to maintain its political-security independence and foster an atmosphere of socio-economic self-reliance in a nation that was once so incredibly dependent on outside powers.