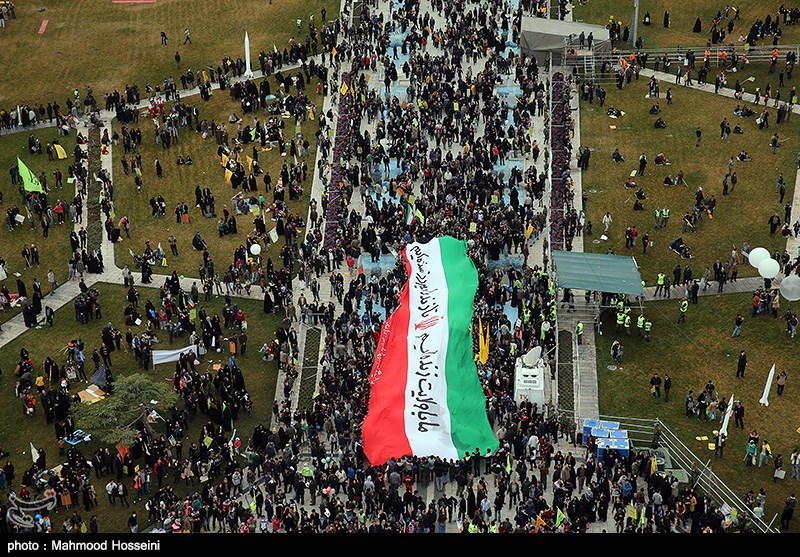 Tehran, Feb 11, IRNA — In a resolution read out at the end of a multi-million march in Tehran to mark the 36th anniversary of the Islamic Revolution, it was stated that the Iranian nation will remain loyal to the ideals of the revolution and will stand by the guidelines of the Supreme Leader of the revolution up to the end.

The resolution stressed the importance of national unity among all ethnic groups especially between the Shia and Sunni Muslims and cautioned against any action to weaken this unity.
It also warned against the efforts of the enemies to make the youth far from the realities and achievements of the Revolution and urged the three branches of the government to seriously confront this conspiracy.

Praising the achievements of Iran in the fields of science and technology and supporting Iran’s negotiating team in the nuclear talks, the resolution emphasized that the only way to reach an agreement is the acceptance of Iran’s inalienable rights.

The resolution also urged the negotiating team to seriously consider the red lines drawn by the Supreme Leader in the talks.

The resolution condemned the illogical and bullying behavior of the hegemonic powers and urged the officials to reduce reliance on oil revenues and instituionlize resistance economy.

Condemning the treason of regional puppet regimes, their cooperation with the Zionist regime and their plots against people of Syria, Iraq, Gaza, and Bahrain, the resolution supported the advisory and decisive help of the Islamic Revolution Guard Corps to thwart the conspiracies of world arrogant powers.

Also expressing disgust at the inhuman act of insulting the Holy Prophet Muhammad (PBUH), the resolution urged the officials to set the ground ready for further clarification of the Supreme Leader’s recent letter to the European and North American youth.

Supporting the popular risings in the region, the resolution condemned the crimes of US and regional reactionary regimes’ agents in Bahrain and supported the developments in Yemen and warned people of that country to be vigilant against foreign conspiracies.

It also said achievements and abilities of Iran in defense industry are the symbol of the country’s preventive power and a guarantee to national security and are absolutely unnegotiable and warned the arrogant powers not to make any miscalculations in this regard.