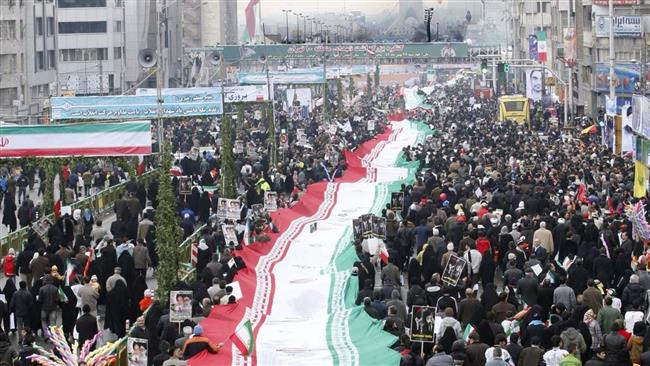 Iranians mark the anniversary of the triumph of the 1979 Islamic Revolution.

Millions of Iranians from the four corners of the country are enthusiastically waiting to make history again by marking the 36th anniversary of the victory of the 1979 Islamic Revolution.

Iranians are set to turn yet another golden page in the country’s history by taking part in the nationwide million-man marches to commemorate the anniversary of the triumph of the Islamic Revolution, which falls on February 11 this year.

On this occasion, Iranians flood the streets across the country, chant anti-US and anti-Israeli slogans and recite slogans that were popular over the years leading to the Islamic Revolution, which put an end to the monarchy of the US-backed Pahlavi regime in the country.

The ceremonies for this year’s auspicious occasion started on February 1 at 9:33 a.m. local time (0603 GMT), the time when the late founder of the Islamic Republic Imam Khomeini returned home from exile on February 1, 1979.

The period from February 1 to February 11 is known as 10-Day Dawn.

Imam Khomeini was welcomed by millions of people who had come together in the capital Tehran from across the country. His arrival intensified popular protests against the US-backed Pahlavi regime, leading to its downfall ten days later.

Iranian President Hassan Rouhani and members of his cabinet also visited the mausoleum of the late Imam to renew their allegiance to the ideals of Imam Khomeini. They were accompanied by the Imam’s grandson, Seyyed Hassan Khomeini.

The Iranian nation toppled the US-backed Pahlavi regime 36 years ago, ending the 2,500 years of monarchic rule in the country.

The Islamic Revolution spearheaded by the late Imam Khomeini established a new political system based on Islamic values and democracy.

During the 10-Day Dawn festivities, Iranians take part in different events and activities to mark the victory of the Islamic Revolution.