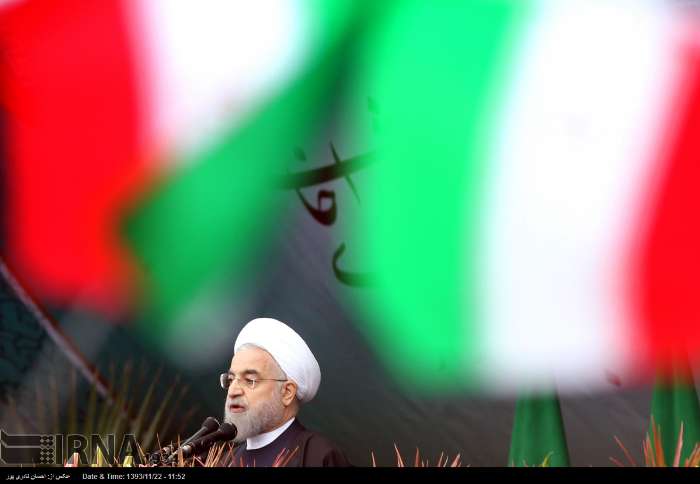 Tehran, Feb 11, IRNA – President Hassan Rouhani said on Wednesday that what has brought Iran to negotiation table is not sanctions, but the country’s decision to engage in talks with the six world powers as it wants to contribute to regional and international peace and stability.

The president made the remarks in an address to millions of Iranians from all walks of life gathering in Tehran’s Azadi Square to mark the 36th victory anniversary of the Islamic Revolution.

Western government claims that Iran has been forced to sit on the negotiation table under the pressure of sanctions, Rouhani said. ‘If, as you claim, it is the sanctions that have made the Iranian nation back down, why don’t you continue with those sanctions?’ the President asked.

Rouhani advised the Western governments to stop lying and be honest with their nations and admit that there is no other way but to interact with the great Iranian nation.

‘Let’s loudly say to the world that in order to establish peace and tranquility across the Middle East there is no other way but (to accept) the presence of the Islamic Republic of Iran,’ Rouhani said.

‘You saw that the only power that could help the people of Iraq, Syria, Lebanon and Yemen in the face of terrorist groups was Iran.’