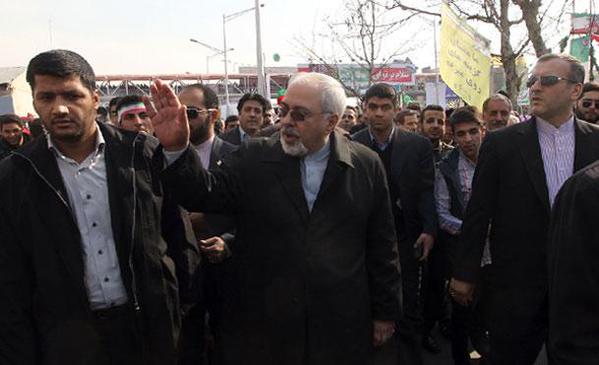 Zarif was referring to latest comments made by Ayatollah Khamenei about his opposition to the prolongation of the nuclear talks.

The Supreme Leader on Sunday (February 8) said that the nuclear negotiations must lead to the lifting of all sanctions against Iran, and that the deal must not envisage prolonged process, because, the enemies favor to use next stages of the deal for bargaining and that they embarked on procrastination so far to make Iran suffer more from sanctions.

Supporting the Leader’s viewpoint, the foreign minister said he also had the same point of view about the future of the talks.

“I am glad that my opinion was in line with the Leader’s,” Zarif told reporters on the sidelines of a huge rally in Tehran to mark the 36th anniversary of the Islamic Revolution victory in 1979.

Referring to Ayatollah Khamenei’s support for the Iranian nuclear negotiating team, Zarif said, “No progress could be made without the Leader’s support.”

Zarif stressed that reaching “a nuclear agreement requires political will of the other party. With such a will, it is possible to make a deal right now but in its absence talks will not end even in ten year.”

Referring to enemies new threats against Iran, Zarif said Iranians have “proved they are not afraid of any threat, will not live with humiliation, and will finally make progress.”

Commenting on certain accusations against Iran about supporting terrorism, Zarif said this was a worn-out claim.

“It has become clear now who is supporting terrorism and the Daesh (ISIS) terrorist group in the region. Look what is happening to Palestinians because of the state terrorism of the Zionist regime.”

He also referred to Iran as one of the first countries that took a position against extremism.

He said Iran has sent a letter to this effect, to the United Nations Secretary General Ban Ki-moon as well as members of the world body.

In his letter to the UN chief which was sent on January 29, Zarif expressed deep concern over spread of Islamphobia and its unsettling manifestations in the world.

The letter had in its attachment the message of Ayatollah Khamenei to the youth of Europe and North America.

The Iranian Leader had called on the Western youngsters not to be influenced by the propaganda of anti-Islamic circles and instead try to realize the real essence of Islam by studying the Holy Quran and other reliable Islamic sources.

West should find out why extremism has its roots in Western states and why those who cut off heads of other peoples are brought up in the West, Zarif said.