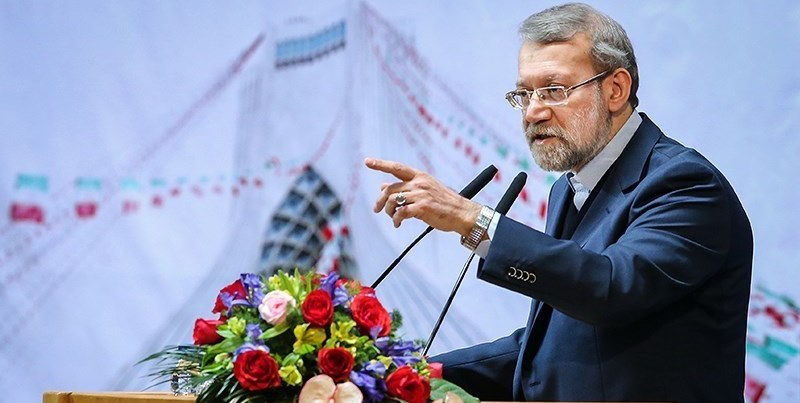 Iranian Parliament (Majlis) Speaker Ali Larijani addresses foreign guests at a ceremony marking the 36th anniversary of the victory of the Islamic Revolution on February 10, 2015.

Iranian Parliament (Majlis) Speaker Ali Larijani says some Western countries in the P5+1 group have mistaken the negotiating table for a place to bargain over Tehran’s nuclear energy program.

“Political negotiations over the [Iranian] nuclear issue can remove misunderstandings, but certain parties act like businessmen in the nuclear talks and seek bargaining. They even sometimes make absurd remarks,” Larijani said on Tuesday.

He made the comments at a gathering of foreign guests attending a ceremony marking the 36th anniversary of the victory of the Islamic Revolution.

Larijani said the West claims to have forced Iran to stop its nuclear development, but they should know that such rhetoric cannot solve their domestic problems. He also stressed that Iran will not abandon its peaceful nuclear program.

The West is mistaken to assume that they can use anti-Iran rhetoric to pile up pressure on the country in future nuclear negotiations, Larijani pointed out.

The senior Iranian official said that negotiations should provide a chance for logical solutions to issues.

Iran and the P5+1 group of countries – Russia, China, France, Britain, the US and Germany – are seeking to reach a high-level political agreement by April 1 and to confirm the full technical details of the accord by July 1.

Since an interim deal was sealed in the Swiss city of Geneva in November 2013, the negotiating sides have missed two self-imposed deadlines to ink a final comprehensive agreement over Tehran’s nuclear energy program.