“The Government of the Islamic Republic of Iran can demonstrate leadership – among the community of nations – by seeking – from early – to align elements of Iran’s strategic 2026 Perspective Plan with the new Sustainable Development Goals (SDG) and methods,” said Gary Lewis, the UN Resident Coordinator in the Islamic Republic of Iran at the 4th International Symposium on Iran 2026 Vision.

In 2005, Iran’s 20-year perspective was designed with a focus on the following:

To review the status of these goals, the 4th International Symposium on Iran 2026 Vision gathered a panel of speakers to consider the challenges and solutions on energy management and sustainable development.

“This important symposium today provides me with an opportunity to convey a very simple message.  The message is to request public planners and financial decision-makers in the Islamic Republic of Iran to review Iran’s 2026 Perspective Plan goals from the perspective of sustainable growth and development,” said Mr. Lewis continued.

He noted that an economic model which focused heavily on growth is – on its own – no longer feasible. It created too many social and environmental challenges, he noted, which eventually become more complex and more costly to address.

He pointed to challenges – called ‘externalities’ by economists – like water scarcity, huge production of greenhouse gases, deforestation, land and water pollution and so on.

He argued that: “now that the draft SDGs have been formally published, Iran’s strategic planners – including the Expediency Council – could consider the 17 SDGs for a longer-term-planning horizon.”

To read the full text of the statement by the Resident Coordinator of the UN in Iran, please click here. 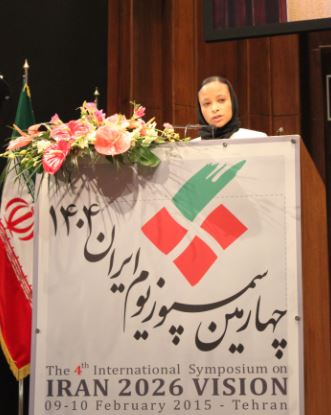 Also speaking at the ceremony  was Ms. Esther Kuisch-Laroche, UNESCODirector of Office and Representative in the Islamic Republic of Iran who pointed to UNESCO’s work on the ground in Iran noting: “Water and energy have become the most pressing priorities for our entire planet and the way in which we manage our scarce natural resources is key to peace and sustainability.”

Ms. Kuisch-Laroche elaborated on UNESCO’sactivities in promoting peace and sustainable development, and praised the Symposium for serving as important platform for international information exchange on crucial topics such as water and energy.

Among other speakers from the UN at the event was Ms. Soudabeh Ahmadzadeh, UNFPA Assistant Representative who touched on the issue of population dynamics. “The link between population, resources, environment and development must be acknowledged and equally taken into consideration in drafting future plans, to achieve sustainable development and ensure every person’s fair share in well-being” said Ms. Ahmadzadeh.

The director of the Trade in Services division of the WTO, Mr. Hamid Mamdouh stated at this event that this particular symposium represents a very important period in Iran. It is a time where the economy has started showing some signs of stabilization. He also noted that this positive trend is to a large extent due to the Government of Iran.

Iran’s Deputy Minister of Energy, Mr. Sattar Mahmoudi was also among the keynote speakers who underlined the importance of public participation in addressing the water scarcity in Iran and highlighted the focal significance of water in the 6th Development Programme of the country. The attendees then got involved in a panel discussion.

Panel discussions will take place during the two-day event.